The global type 2 diabetes therapeutics market is expected to be worth $45.1 Bn by 2020 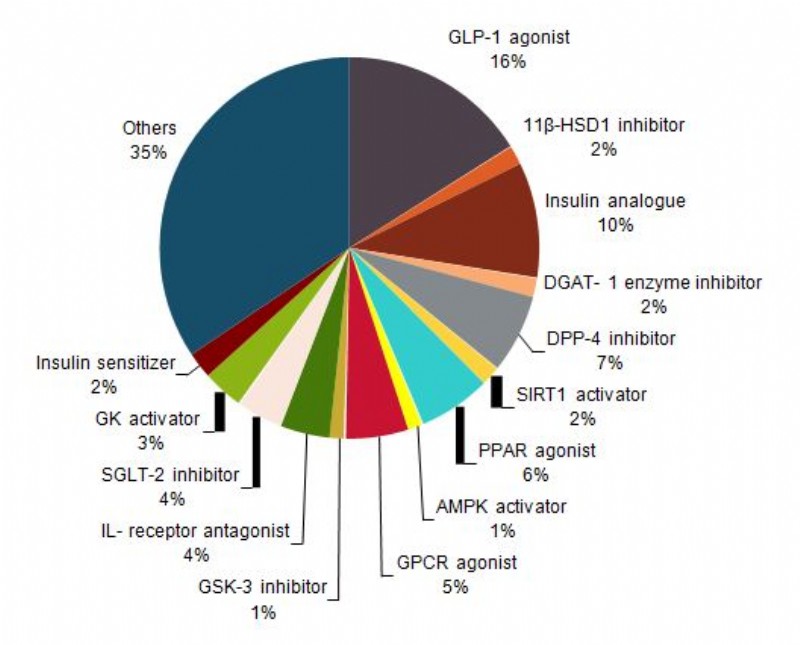 The global type 2 diabetes therapeutics market is very attractive and has primarily been driven by the growth in patient volume and the annual cost of therapy. Patient volume has been driven by the increased incidence and prevalence of diabetes and the growth in treatment usage patterns, such as the diseased population, the treatment-seeking population, the diagnosed population and the prescription population. The annual cost of type 2 diabetes therapy was driven by the uptake of newly approved drugs, such as Actos and Avandia (until 2006), and the launch of new therapies, such as Levemir, Byetta, Januvia, and Victoza. The annual cost of therapy was also driven by the increased use of multiple drugs per patient and the adoption of combination therapies, such as Actoplusmet (pioglitazone and metformin), Avandamet (rosiglitazone and metformin), Janumet (sitagliptin and metformin) and Duetact (pioglitazone and glimepiride) in the first-line and second-line treatment of type 2 diabetes patients.

Current Competition in the Type 2 Diabetes Therapeutics Market is Strong

This new analysis shows that the current competition in the type 2 diabetes therapeutics market is strong. The current market is led by drugs such as Lantus, Januvia and Actos. Until 2007, Avandia dominated the type 2 diabetes therapeutics market with Actos. However, recent disclosures of the drug’s probable cardiovascular side effects affected its sales. In October, 2010, Avandia was withdrawn from the European market and is currently available in the US with restricted use. The US FDA has given a black box warning to Actos and has been withdrawn from France and Germany due to the association of adverse effects such as bladder cancer with its prolonged usage. Biguanides, especially metformin, were the largest prescribed antidiabetic drugs in terms of volume in 2011. These were followed by glitazones, sulfonylureas, DPP4 inhibitors and insulin analogs. The major players in the type 2 diabetes therapeutics market are Sanofi, Merck & Co., Takeda Pharmaceuticals and Novo Nordisk.

This new analysis shows that there are 230 molecules in the various stages of the clinical pipeline for type 2 diabetes. Phase I and Phase II clinical trials each account for 28% of the pipeline and late stage, which includes filed and Phase III, accounts for 18%. About 35% of the Phase III clinical trials are being conducted on first-in-class molecules. The late stage pipeline includes a few first-in-class and promising drugs, such as dapagliflozin, canagliflozin and D-Tagatose. Dapagliflozin has been filed with FDA and EMA for review, while canagliflozin and D-Tagatose are in Phase III of the clinical pipeline. The mechanism of action of these molecules is different from that of the marketed therapies. If a molecule is developed with better efficacy and safety profiles than the best current available treatment regimen, that drug will become a blockbuster and have the potential to tap into some of the significant unmet need that exists in the market.

The late-stage pipeline also has many me-too molecules, such as alogliptin, bydureon, lixisenatide and syncria from DPP4 inhibitors and GLP-1 agonists, respectively. Bydureon has been filed for regulatory approval with the US FDA (Food and Drug Administration). Overall, the pipeline is flooded with me-too drugs, such as DPP-4 inhibitors, PPAR agonists, DGAT-1 enzyme inhibitors and GLP-1 agonists. Once these drugs enter the market, an intense price war is expected to arise as the drugs will target the same patients as the first generation drugs.

The patents of some of the key established molecules are set to expire between 2012 and 2017. Key products such as Actos, Humalog and Lantus are all expected to go off-patent. However, the impact of the patent expiry of these drugs will be offset by the expected launch of new products in the market.

This new analysis shows that the currently available treatment options are meeting the desired efficacy endpoints. However, these drugs lack sufficient safety profiles. The major unmet needs of the type 2 diabetes therapeutics market are the safety and patient compliance of antidiabetic drugs.

Though the efficacy of antidiabetic drugs is commendable, glycemic control is still suboptimal in a substantial proportion of patients and the safety profiles of some drugs is very poor. In 2007, Avandia (rosiglitazone) was found to increase the probability of heart-related problems. Following this disclosure, the EU commission suspended marketing authorization for Avandia products and it has subsequently been withdrawn from the European market. In the US market, Avandia is currently only available with very restricted use. The US FDA has given a black box warning to Actos and has also revised the safety information on Byetta (exenatide) by adding information about possible kidney function problems, including kidney failure. Actos has been withdrawn from France and Germany due to the adverse effects associated with its prolonged usage, such as bladder cancer. Also, the use of Actos has been restricted to that of a triple therapy regime in many countries, including the US.