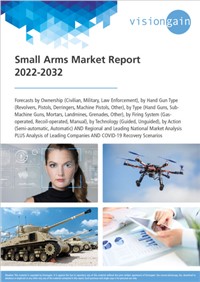 The Small Arms Market Report 2022-2032: This report will prove invaluable to leading firms striving for new revenue pockets if they wish to better understand the industry and its underlying dynamics. It will be useful for companies that would like to expand into different industries or to expand their existing operations in a new region.

Small Arms Market is Driven by Multiple Factors
Political unrest, increased participation in shooting and hunting sports, and increased demand for law enforcement and self-defense are all driving the arms market. The introduction of severe rules regulating the possession and procurement of weaponry, as well as the strict enforcement of anti-hunting legislation, are hampering the market’s growth. The firm is expected to benefit from increased efforts to combat terrorism. Because of increased demand from civilian uses such as self-defense and sports, the small arms industry is likely to grow. In recent years, the increased prevalence of armed violence and terrorism has driven a significant number of civilians to purchase small weapons in order to protect themselves. The same motivation is driving law enforcement and military forces around the world to invest in cutting-edge weapon systems, such as handguns and rifles. Factors like as rising cross-border disputes, rising wars, rising incidences of terrorism, and rising civilian use are predicted to promote the growth of the small arms market. Increased small arms purchase by law enforcement agencies and armies is being pushed by several fights against terrorist organisations, particularly in the Asia-Pacific and Middle East regions.

The International Threat Of Small Arms Proliferation And Misuse
One of today’s most significant security issues is the illicit proliferation and misuse of small arms and light weapons . Each year, tens of thousands of people are killed or injured in battles predominantly waged with these weapons, as well as in crime-ridden neighbourhoods outside of conflict zones. They are also the preferred weapons of many terrorists. Despite its flaws, the PoA has aided international efforts to prevent the uncontrolled proliferation and misuse of these lethal weapons. Increasing the number of signatories to key treaties, establishing best practise standards, removing surplus stockpiles, improving national legislation, and raising awareness about the issue are all part of these activities. In some places, progress has been significant. The global campaign sponsored by the United States to halt the illegal trade in Man-Portable Air Defense Systems is particularly notable (MANPADS).

What Are These Questions You Should Ask Before Buying A Market Research Report?

You need to discover how this will impact the small arms market today, and over the next 10 years:

This report tells you TODAY how the small arms market will develop in the next 10 years, and in-line with the variations in COVID-19 economic recession and bounce. This market is more critical now than at any point over the last 10 years.

Forecasts to 2032 and other analyses reveal the commercial prospects

This report includes data analysis and invaluable insight into how COVID-19 will affect the industry and your company. Four COVID-19 recovery patterns and their impact, namely, V, L, W and U are discussed in this report.