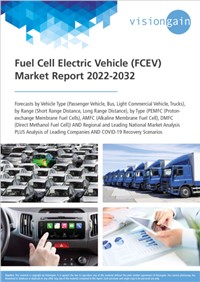 Roadmap to Hydrogen Economy
In the transportation sector, hydrogen-powered FCEVs might be used in conjunction with BEVs to accomplish profound decarbonization across all modes of transportation. FCEVs find their usage in applications that demand extended range, heavy payloads, and a lot of flexibility. Thus, over the forecast period from 2022 to 2032; hydrogen will reduce the total cost of ownership of trains & forklifts. These cost savings will need a large increase in production capacity. If implemented, FCEVs would have cheaper investment costs in long-range segments than BEVs, as well as much shorter refuelling periods.

Commercially usable FCEV buses, medium-sized automobiles, and forklifts are now available. More models in medium and large automobiles, buses, trucks, vans, and trains will be introduced during the following five years, with other sectors such as smaller cars and minibuses expected to follow until 2030. By 2030, when sales begin to ramp up in the rest of the globe, 1 in 12 vehicles sold in California, Germany, South Korea, & Japan, should be hydrogen-powered. Thousands of passenger ships and trains, as well as over 350,000 hydrogen cars and 50,000 hydrogen buses, could transport people without releasing carbon or local pollutants. By 2050, we expect hydrogen to be a feedstock for renewable fuels in freight shipping & commercial aviation sectors.

As the energy system becomes more reliant on renewables, hydrogen may play an increasingly important role in the storage and generation of clean power. Hydrogen is a crucial facilitator in the transition to renewable energy because it enables the effective storage and transportation of renewable power over extended periods

Japan plans to electrify all new passenger automobiles by the mid-2030s, according to METI
In a declaration issued by the PM in October 2020, Japan stated its ambition to be carbon neutral by 2050. The Ministry of Economy, Trade, and Industry (METI) released the Green Growth Strategy in December, which contains action plans for 14 sectors. It will promote increased electrification, fuel cell usage, and next-generation batteries, in the transportation sector.

It advocated revisiting fuel efficiency rules, public purchase of EVs, charging infrastructure development, and large-scale investment in EV supply chains to achieve this aim. In mid-2021, a decision on choices will be taken. The fuel economy criteria for LDVs may be enhanced to achieve the more ambitious mid-2030 and carbon neutrality objectives, according to speculation.

Japan was one of the few countries where EV sales fell faster than total automobile sales in 2020. After Japan boosted its subsidies for passenger ZEVs registered after the end of 2020, sales are projected to rebound. Other tax breaks for BEVs, PHEVs, & FCEVs have been extended for another two years. Electric vehicle sales climbed by roughly 35% in January 2021 compared to January 2020.

Furthermore, in areas with extremely high power and uptime needs, like large mining vehicles, hydrogen combustion (H2 ICE) is a feasible option. Trains, ships, and aircraft are all making progress with hydrogen. Hydrogen & hydrogen-based fuels may help aviation achieve cost-effective decarbonization. LH2 (liquid hydrogen) is the most cost-effective way for the aviation industry to decarbonize short- to medium-range aircraft. To be cost-competitive, other end-applications will require a higher carbon cost. Multiple ground-breaking initiatives in the United Kingdom, for example, are testing the integration of hydrogen into natural gas systems for domestic heating. Hydrogen is also gaining popularity as a backup power source, particularly for high-power applications such as data centers.

What are the Market Drivers?
• Strict Vehicular Regulations Across Developed Economies
• Government Investments Towards Development of FCEV Technologies
• Growing initiatives towards zero-emission across the globe to support market development
• Carbon emissions regulations across geographies to fuel FCEV market growth
• Technological advancements to boost FCEV market growth over the next decade

Discover how to stay ahead
Our 560+ page report provides 500+ tables and charts/graphs. Read on to discover the most lucrative areas in the industry and the future market prospects. Our new study lets you assess forecasted sales at overall world market and regional level. See financial results, trends, opportunities, and revenue predictions. Much opportunity remains in this growing Fuel Cell Electric Vehicle (FCEV) Market. See how to exploit the opportunities.

This report includes data analysis and invaluable insight into how COVID-19 will affect your industry.

Discover sales predictions for the world market and submarkets