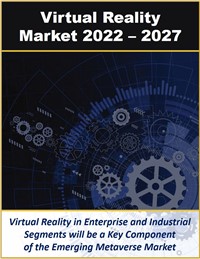 Select Report Findings: The purpose of VR technology is to provide a near-real experience using reality emulation in a virtual environment.  The VR market is poised to experience a massive transformation over the next three to five years driven by advances in devices, apps, components, content, and broadband communication.

The key player sees fully immersive virtual reality systems gaining substantial market momentum in consumer and enterprise markets within the next few years. These VR systems will provide an unprecedented digital experience for humans, often including multiple senses as well as interaction with virtual objects and/or interaction between the real and virtual worlds.

Virtual Reality in Consumer Market
For the consumer virtual reality market, we see entertainment and lifestyle enhancements leading the way with the former including VR enhanced gaming and the latter including a plethora of new apps such as virtual location experiences in which groups of people get together virtually in the cyber-world.

Examples include everything from virtual alumni events to watching your favorite football team play in a virtual stadium with ultra-real sights, sounds, and even feelings and smells of game day. The advancement of AI embedded within the VR market will add to realism by introducing random events that happen within a given experience.

Virtual Reality in Enterprise and Industrial Verticals
For enterprise and industrial virtual reality market segments, Mind Commerce sees simulations and training leading the way. We see everything from situational training (such as Verizon using Striver to train its employees how to better deal with robberies) to more traditional expectations such as VR enhanced simulations for flight and vehicle training.

Businesses will also seek to use VR as a means to destress employees by offering them a virtual experience of their everyday work with random events thrown into the mix, both to add interest/amusement as well as to test and train them to see how they might react given a real-world experience such as how to best deal with a senile shoplifter.

Virtual Reality and the Importance of 5G and Edge Computing
The key player sees the virtual reality market gaining ground once 5G is more firmly in place commercially, but not entirely due to wireless broadband. Instead, we see a massive build-out of broadband as a whole (due to competition from the 5G market) as one of the fundamental drivers for VR adoption. This will be driven in part by substantially greater availability of FTTX and HFC as well as greater bandwidth overall at lower costs.

We see 5G acting as a launch pad for enhanced consumer wireless services such as augmented reality, virtual reality, and cloud gaming. Previously encumbered by a combination of technology gaps and consumer readiness issues, the virtual reality market is poised for substantive global growth, providing abundant opportunities for service providers, content developers, and ecosystem component providers. While today many apps and services within the XR universe are very device dependent and network constrained, convergence is on the horizon from a device perspective as well as substantial opportunities through untethering via 5G and Mobile Edge Computing (MEC).

MEC will be particularly important in support of latency-sensitive apps and services for various consumer, enterprise, and industrial use cases. This will be particularly the case for VR portability, and to some extent, mobility to the extent that there is good 5G coverage. Substantially lower latency facilitated by the combination of 5G and MEC will lead to many new and enhanced applications. For example, VR based telepresence will ultimately become the norm, starting with private enterprise solutions and the SMB markets through the likes of Zoom.

Through Voice over 5G (Vo5G), there will also be support for Ultra High Definition (UHD) audio communications, streaming video and ultra-clear voice communication for next generation virtual reality applications and services. Vo5G will benefit VR for consumer and enterprise applications in many respects such as UHD becoming the norm in immersive experiences. Mind Commerce sees Vo5G ultimately replacing VoLTE as a preferred method for voice communication as well as acting as the input medium for a wide variety of user interfaces, many of which currently rely upon WiFi.
Print page | Download Sample pages