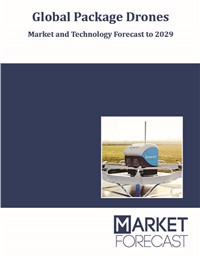 Package Drones are used to transport lightweight parcels from the sellers to the buyers. The buyers in this case range from e-Commerce websites to retail stores. The growth in the retail and e-commerce market is expected to be one of the key drivers of this market. Moreover, the increasing purchasing power of the consumers is anticipated to increase a buyer's propensity to use e-commerce platforms.

On making a cumulative analysis, the market is seen to expand with a CAGR of roughly 48%. The expanding market size is mainly due to the growing consumer base for e-commerce platforms. The US e-commerce market is expected to grow by a value of 17.1% in the year 2021 to attain a value of USD 933 Billion. As compared to the year 2019, the sales for e-commerce websites within the US have doubled. This growth is attributed to the onset of the pandemic, COVID-19. The number of visitors to online shopping platforms has increased marginally within the past 3 years. Between the years 2019 and 2020, the revenue generated via Amazon has increased from a value of USD 280.52 Billion to a value of 386.06 Billion, the increase in online sales could act as a driver to this market.
In terms of End-Users, both Retail and Food Delivery Verticals account for a major share of the value chain for this market. Both the segments are expected to grow with a CAGR of roughly 46% each.

As of 2020, Package Drones are witnessed to have a transportation capacity of roughly 2Kgs. The weight criteria serve as a key market challenge for this sector. Therefore, technology developers are focused on increasing the payload capacity associated with Package Drones. The delivery rates for retail goods and consumables' between the weight limit of 2-5Kgs is expected to increase within the forecast period.

The Drones Market is majorly characterized as Unmanned, and Manned Systems. Amongst the two categories, the market for unmanned drones is expected to grow at a faster growth rate due to burgeoning market trends like Industry 4.0. The inclusion of unmanned drones would reduce the probability of human error and increase the customer satisfaction rate. Key companies like Amazon, Uber, and FedEx are currently competing for Drone delivery space. As of 2018, the company Uber envisioned the incorporation of drones with the Uber Eats service provided by the company. The test runs for this technology are commencing during the summer, 2021.

Google's owner Alphabet is also one of the companies that competed for airspace with other drone manufacturers. The project Wing was initiated by Alphabet in the year 2014. The program gained its name in the year 2018 when it became independent from the company, Alphabet. The wing was the first UAV to receive an FAA certification from the US Department of Transportation in April 2019.

Alphabet's Wing drone weighs 4.8Kg / 11 lbs and has a wingspan of roughly 4.3 ft / 1 meter. The drone has the ability to carry packages (payload) with a weight of roughly 1.5Kg / 3.3lb. Wing's uses 12 fuselage mounted lift propellers for hover and two wing-mounted propellers for cruise flight at up to 113kph / 70mph at an altitude of c. 45m / 150 ft. While making deliveries, Wing's Drones hover 23 ft / 7 meters above the ground. The drove delivers packages by lowering suspension cables that are retracted after the package reaches the ground.

Standard FAA certification limits the mobility of an autonomous package drone. UAVs are generally forbidden from flying beyond the line of sight offered. The FAA has granted permission for long-haul autonomous deliveries to only certain companies. Moreover, these deliveries are not chargeable by the drone companies. Therefore, the standard FAA guidelines restrict the market usability of unmanned package drones. To evade the mentioned regulations, Wing secured a vital air carrier certification from the FAA. This certification does not restrict the drone to transportation compliances laid down by the regulatory body.

Conclusively, the total revenue generated by the Global Package Drones market was recorded to be USD 0.1 Billion in the year 2020. The market is expected to grow with a CAGR of 48% between the forecast period (2021-2029). The market is poised to attain a value of USD 28.76 Billion by the year 2029.

This report has been segmented by Type, Region, and End-Users.