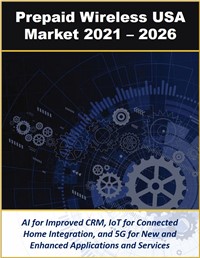 This report evaluates the prepaid wireless market in the United States including major provider analysis and service assessment, technologies involved in prepaid service delivery, and assessment of the future of prepaid communications, content, and commerce. The report includes analysis of the 5G impact.

Prepaid wireless service providers in the United States have become increasingly competitive in recent years as they evolve offerings to be more on par with post-paid service features and plans. For example, Verizon Wireless now offers prepaid family plans, unlimited plans, and support for BYOD whereas this was not the case just a few years ago. We anticipate the continued evolution of prepaid wireless in general as part of a dominant trend towards prepaying mobile services becoming increasingly more comparable with post-paid wireless.

The future of prepaid wireless communications will depend on more than just carrier-centric applications, communications, content, and commerce. For example, Mind Commerce sees prepaid as an important aspect of many next-generation services that are provided by a variety of third-party service companies that do not wish to offer a postpaid option as it would typically rely upon wireless carrier billing via prepay.

Growth in prepaid wireless service will also depend on the extent to which next-generation services such as virtual reality are generally supported on a pre-pay basis. This is to say that prepaid customers must have access to wireless data plans that put them on par with postpaid in terms of both bandwidth and low-latency required for acceptable end-user quality of experience.

While many emerging applications will be offered by Over-the-Top (OTT) service providers, we strongly recommend that MNOs offer their own branded/controlled Value-added Service (VAS) applications. The OTT application business model has caused data payload (e.g. apps that use data) to become increasingly more valuable to consumers than data itself, which is rapidly becoming a marginalized commodity. With this development, VAS applications become much more important to network operators.

With the ever-increasing commoditization of carrier core services (mostly voice and messaging), there will be a growing dependence on VAS applications for initially top-line revenue growth (as data growth tapers off and margins are squeezed) and then for margin growth as bearer services become a cost-plus commodity. Prepaid wireless service providers must also provide their own VAS apps to remain competitive, even if it necessitates them offering those apps on an OTT basis themselves.

Prepaid Wireless in the United States: Market Analysis and Forecast 2016 - 2020