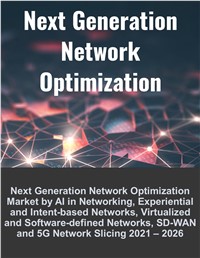 This research assesses the impact of AI in various networking products and solutions including embedded equipment, components, and software platforms (network automation, optimization, and transformation). The report also evaluates the role of SDN, Edge Computing, NFV, and Augmented Intelligence in the formation and support of AI driven networking ecosystems. In addition, the impact of 5G networks, IoT technology and systems, and network analytics functions is also analyzed. The report assesses technologies, products, and solutions from key solution providers, identifying key companies in each segment of the competitive landscape.

This research also evaluates intent based networking including comparison of IBN with traditional networking in terms of architecture, capabilities, and benefits for carrier and enterprise networks. The report analyzes technologies, infrastructure, and the impact of implementing intent-based networking in conjunction with other emerging technologies such as Multi-access Edge Computing (MEC), 5G, AI, and IoT. The report also evaluates leading vendors, strategies, and solutions.

It also investigates experiential networking market opportunities. The report evaluates companies anticipated to be influential in ENI as well as market positioning and strategies. It includes analysis by technology, use case, and solution. It also assesses experiential networking market opportunities by industry vertical. Quantitative analysis includes global and regional forecasts as well as by leading countries within each region for 2021 through 2026. The report also provides specific recommendations across the ICT and digital technology ecosystem relative to ENI.

This research also evaluates the network virtualization and “softwarization” market involving the implementation and operation of software-defined networking and network function virtualization. The report evaluates both SDN and NFV for communication service providers and enterprises. The report provides SDN and NFV forecasts by solution, application, deployment mode, service providers and enterprise for 2021 to 2026.

·         Essential support, maintenance, and training for experiential networking will reach $56.7M globally by 2026

·         AI-enabled networking will support many solutions, such as incremental growth of $565M in the asset tracking market by 2026

Artificial Intelligence is rapidly becoming an integral part of various digital technologies including software and many aspects of ICT infrastructure. For example, the AI chipset marketplace is poised to transform the entire embedded system ecosystem with a multitude of AI capabilities such as deep machine learning, image detection, and many others. With 85% of all chipsets globally shipping AI-equipped, over 63% of all electronics will have some form of embedded intelligence by 2026.

Infrastructure is anticipated to be one of the primary focus areas for AI as network operators seek to reduce costs and improve efficiencies while simultaneously reducing the incidence of errors and adverse network events. AI technology will play a key role in the transformation of network intelligence to become increasingly self-driven. Mind Commerce sees technologies such as cognitive computing, machine learning, deep learning, and predictive application as fundamental to the transformation of network configuration automation and operational autonomy.

AI-driven networking is going to impact wireless networking of all sizes for all communication service providers, improving service realization and support, and ultimately impacting every industry vertical from transportation to medical care to financial services. Furthermore, the analyst sees the convergence of AI and Internet of Things (IoT) technologies and solutions (AIoT) leading to “thinking” networks and systems that are becoming increasingly more capable of solving a wide range of problems across a diverse number of industry verticals.

In terms of the impact of AI on wireless networks, the evolution is already underway from a standards and network topology approach with 5G service-based architectures. Implementation within public communications service providers will scale slowly due to legacy systems such as OSS/BSS. However, closed-loop private 5G wireless networks will be in the vanguard of AI network deployment.

This evolution will lead to AI-enabled functions throughout 6G networks within the 2030 to 2040 timeframe. This will include contextually agile RF networks that support event-driven adaptation and resource allocation optimization. It will also include many improvements at the device level such as AI-enabled distributed computing, which will facilitate persistent computation-oriented communications.

SDN and virtualization are poised to transform network and service architecture thanks to improvements in technologies that offer improved performance and lower costs. However, some data centers use SDN but do not offer NFV as a service. Although a less likely scenario, a service provider can support NFV without having an SDN-enabled network. In short, NFV usually runs over SDN enabled networks, but not all SDN networks need to provide NFV.

SDN in support of Wide Area Networking (WAN), also known as SD-WAN, is rapidly achieving mainstream adoption as both network operators and enterprises take a software-centric approach to more optimally manage WAN operations and provide efficient access to cloud applications. Part of the reason for its popularity is the technology enables solutions that provide a more open hardware architecture configuration. This facilitates greater flexibility overall as well as ease of migration from proprietary boxes and multiprotocol label switching services, which is a dominant industry trend as networks increasingly utilize virtualized infrastructure and non-proprietary equipment.

Many consider SD-WAN part of the evolution of SDN as applied to existing networking technologies such as Multiprotocol Label Switching (MPLS), which directs data from one node to the next based on short path labels rather than long network addresses. SD-WAN was often applied as an overlay to existing network technologies such as MPLS virtual private networks and the Internet as a whole. SD-WAN saw early favor with enterprise networks on a managed service basis but has also gained great support with communication service providers (CSP) as a means of unifying networks that are increasingly becoming software-controlled and virtualized.

Intent-Based Networks capture business intent, and in so doing, bridge the gap between business operations and information technology. The benefits of intent-based networking are many and varied, but arguably all improvements stem from the ability for IBN to automate network management and orchestration in a proactive and intelligent manner. Accordingly, intent-based networking represents a solution set that is at the confluence of a few key technologies including machine learning (and other forms of artificial intelligence), Software Defined Networking (SDN), and Internet of Things (IoT) technologies.

More specifically, intent-based networking is defined largely by the extent to which network orchestration is automated, including software that may implement changes autonomously. Networks are increasingly becoming more self-aware and capable of dynamic optimization, often in real-time. In some cases, changes are made to enhance a current state. In other cases, Mind Commerce sees remediation as required to adjust a sub-optimal condition or situation that has gone awry. Analysts see this as an area in which machine learning will become extremely valuable for IBN as AI will provide networks the ability to identify and learn from patterns and behaviors, leading to autonomous decision making, reducing human errors and costs while improving efficiency.

Experiential networking represents a policy-based and model-driven approach to network management in which data will be leveraged from many sources, and processed by disparate technologies, with a goal of simplifying complex device configuration and monitoring systems. This will also enable improved scalability for telecom and IT networking, which will be a boon for rapidly expanding Internet of Things (IoT) networks and systems as IoT becomes increasingly more voluminous and complex.

Like the Intent-Based Networking market for enterprise, ENI is focused on improving man-machine interaction for communications networks. A key goal of ENI is to automate network operations, which will have the effect of fewer errors as well as greater overall operational efficiency and effectiveness. Accordingly, the experiential networking market is intended to use a context-aware, meta-data approach to policy management that takes into consideration changes in user needs, environmental adaptation, and evolution of business goals.

5G network slicing enables a highly programmable multi-service architecture, which consists of three layers (1) Service Instance Layer, (2) Network Slice Instance Layer, and (3) Resource Layer. One important architecture component is the Slice Selection Function (SSF), which handles device attach requests and new service establishments. The SSF selects an optimal slice based on user information, device type, and capabilities. This supports one of the important goals of radio access management, which is to support configuration rules for each slice. 5G network slicing also allows for core networks to be logically separated in terms of connectivity and network capabilities. Separation of the control plane and user plane is a key aspect of the 5G network slicing market, allowing resources to be scaled independently.

One of the opportunities for carriers is to leverage 5G network slicing for new business development by way of expanded capabilities for virtual network operators (VNO). Since 5G network slicing enables multiple logical networks to act in an independent manner operationally, a VNO could support many different types of customers including consumers, enterprise, and industrial businesses. A network slice could be completely different for a consumer using an eMBB application versus an industrial URLLC application. For example, 5G network slicing allows for isolation of bandwidth, processing, storage, and Traffic. This allows resources to be allocated for QoS-specific needs.

Perhaps one of the most promising areas for carriers is to leverage 5G network slicing market capabilities to offer dynamic slicing with differentiated pricing based on customer needs and resource availability. Factors to consider for each slice allocation include bandwidth availability, latency support, and overall network elasticity to scale to customer needs. Additional factors that determine value and cost to the customer include network homogeneity, connection density, and type of connection.