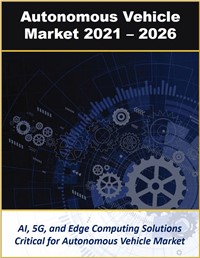 Select Report Findings: The report provides global and regional forecasts for the autonomous vehicle market including hardware, software, and services along with emerging technologies from 2021 to 2026. The report covers major consumer and commercial categories including personal vehicles, shared vehicles (ride sharing and shared vehicles/partial ownership) and rentals. The report also evaluates autonomous control in ICE vehicles, EV, and ICE/EV hybrids.

The extent of disruption will increase with the degree of vehicle autonomy, which is measured in levels from zero (fully human operated) to five (fully automated system) with evolution from levels 1 through 4 consisting of an autopilot system combined with some level of human control or intervention capability. Autonomous vehicles are anticipated to become the foundation of transportation as a service globally.

The automotive ecosystem is also faced with disruption from electric vehicles (EV), which has transformed supply chain economics at the vehicle component level as well as consumer value perception and lifecycle management. Improvements in battery cost/performance and reduction in cost of power train components for EV will lead to lower overall purchase cost that is more comparable with traditional internal combustion engine (ICE) vehicles.

The autonomous vehicle ecosystem will also be highly disruptive with respect to the consumer segment regarding the traditional production and sales cycle. This will be due largely to the vast amount of data produced by self-driving cars, vans, and trucks. The use of AI and big data analytics will allow both real-time decision-making as well as post event analytics.

Autonomous Vehicle Growth Factors and Constraints
The autonomous vehicle market will grow rapidly during the 2020s and will transform many industries including consumer mobility, commercial transport, industrial automation, smart cities, and transportation systems as a whole. There are many factors that will drive growth and adoption of autonomous vehicles including cost reduction, safety improvements, and incremental advances in consumer perception.

For example, the U.S. Department of Transportation has moved forward with an Automated Vehicles Comprehensive Plan with the intention of establishing policies and regulations to ensure the safe and full integration of automated driving systems into the surface transportation system. The plan includes real-world examples of how policies and regulations will relate to emerging automated driving systems applications.

In addition to overcoming public trust factors relative to safety, the autonomous vehicle market is also focused on the major consumer upsides to self-driving vehicles, which include less expensive transport, opportunities for ride sharing and fractional ownership, and ultimately reduced outright leasing and ownership of cars, vans, and trucks. This is anticipated to have a major impact on OEMs and traditional automakers, despite the fact that market leading automobile manufacturers are aggressively pursuing autonomous vehicle product offerings.

The above-mentioned market forces, availability of cost-effective and safe technology, and appropriate governmental oversight are all key factors coming together to enable a robust autonomous vehicle ecosystem. Accordingly, the autonomous vehicle market is beginning to move into the next market cycle beyond the early-adopter phase. Mind Commerce estimates indicate end-users will not fully embrace self-driving vehicles until the 2027 time-frame.

In the near future, Mind Commerce anticipates that automobile vendors will offer next generation connected vehicle apps to human occupants within autonomous vehicles that capitalize upon hands-free operation, and in some cases, offer fully immersive experiences for longer trips.

Autonomous Vehicles for Commercial Fleets and other Business Operations
The evolution of self-driving vehicles for the fleet market will be human controlled fleets to machine/human-controlled fleets to completely autonomous (e.g. machine-driven) vehicles that leverage various technologies including sensors, AI, cognitive computing, geo-fencing, GIS/mapping, and more. Ultimately, the market will achieve level 4 autonomy, which is similar to level 3, but the human behind the wheel is considered to be a “passenger” rather than a “driver.”
Market leading autonomous vehicle use cases will be found primarily within the business realm with an emphasis on shipping and commercial fleets. Important within this segment is heavy haul trucking, which refers to the transport of oversize or overweight freight equipped with specialized trailers and transporting heavy equipment.