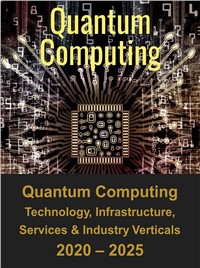 This report assesses the technology, companies/organizations, R&D efforts, and potential solutions facilitated by quantum computing. The report provides global and regional forecasts as well as the outlook for quantum computing impact on infrastructure including hardware, software, applications, and services from 2021 to 2026. This includes the quantum computing market across major industry verticals.

While classical (non-quantum) computers make the modern digital world possible, there are many tasks that cannot be solved using conventional computational methods. This is because of limitations in processing power. For example, fourth-generation computers cannot perform multiple computations at one time with one processor. Physical phenomena at the nanoscale indicate that a quantum computer is capable of computational feats that are orders of magnitude greater than conventional methods.

This is due to the use of something referred to as a quantum bit (qubit), which may exist as a zero or one (as in classical computing) or may exist in two-states simultaneously (0 and 1 at the same time) due to the superposition principle of quantum physics. This enables greater processing power than the normal binary (zero only or one only) representation of data.

Quantum computing is anticipated to support many new and enhanced capabilities including: While there is great promise for quantum computing, it remains largely in the research and development (R&D) stage as companies, universities, and research organizations seek to solve some of the practical problems for commercialization such as how to keep a qubit stable.

The stability problem is due to molecules always being in motion, even if that motion is merely a small vibration. When qubits are disturbed, a condition referred to as decoherence occurs, rendering computing results unpredictable or even useless.
One of the potential solutions is to use super-cooling methods such as cryogenics. Some say there is a need to reach absolute zero (the temperature at which all molecular motion ceases), but that is a theoretical temperature that is practically impossible to reach and even more difficult to maintain. If possible, it would require enormous amounts of energy.

There are some room-temperature quantum computers in R&D using photonic qubits, but nothing is yet scalable. Some experts say that if the qubit energy level is high enough, cryogenic type cooling is not a requirement. Alternatives include ion trap quantum computing and other methods to achieve very cold super-cooled small scale demonstration level computing platforms.

There are additional issues involved with implementing and operating quantum computing. In terms of maintenance, quantum systems must be kept at subzero temperatures to keep the qubits stable, which creates trouble for people working with them and expensive, energy-consuming equipment to support.

Additional issues arise with quantum computing due to quantum effects at the atomic level, such as interference between electrons. The implications are that Moore’s law breaks down, which means one cannot simply assume computational innovation will grow at the same pace with quantum computers.

The implications for data processing, communications, digital commerce and security, and the Internet as a whole cannot be overstated as quantum computing is poised to radically transform the Information and Communications Technology (ICT) sector.

In addition to many anticipated impacts within the ICT vertical, Mind Commerce anticipates quantum computing disruption across entire industries ranging from government and defense to logistics and manufacturing. No industry vertical will be immune to the potential impact of quantum computing, and therefore, every industry must pay great attention to technology developments, implementation, integration, and market impacts.