How does it work? Request Your Personal Discount
YearEnd Modal 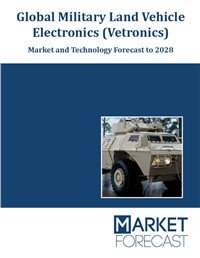 The digital battlefield has become a force multiplier in the 21st century that has reshaped how military forces around the globe prepare for and overcome regional and international competitors' issues. Land vehicles, having become beneficial, interlinked nodes in the field with all-new tactical and logistical abilities, have not escaped the significant impacts of digitalization. The number of advanced electronic systems at ground level has increased over the last two decades as defence departments aim to build their armed forces lighter, faster, and ready to deploy.

The electronic equipment associated with vehicles that are mainly operated by defence sectors is part of Vetronics. These include different systems including navigation systems, display systems, C3 systems, weapons control systems, vehicle protection systems, power systems, which are used to improve combat capabilities and spatial awareness of military vehicles, among others. Also, these systems are crucial in improving the efficiency of land vehicles and their role in network-centered integrated warfare operational activities.

Variables such as focusing on improving frontlines situational awareness and increasing occurrences of asymmetric and network-centered warfare have a major positive impact over the military land vehicle electronics (Vetronics) market. Moreover, the increase in defence spending, particularly in emerging economies, and subsequent investments in the procurement of such systems are further boosting the growth of the market. Factors such as strict regulations and consequent delays in procurement processes, however, hinder the growth of the market to some extent. Increasing terrorist attacks and a focus on counter operations, and the launch of vehicle modernization programs by many nations around the world, have created promising opportunities for the military land vehicle electronics (Vetronics) market to grow.

The market revenue for Global Military Land Vehicle Electronics (Vetronics) Market accounted for USD 3.64 Billion in the year 2020 and it is anticipated to reach a value of around USD 6.01 Billion by the year 2028. The market growth dynamics account for a CAGR of 5.73% during the forecast period, 2020-2028.

The report is aimed at:

The market is segmented based on Region, Vehicles, and System:

Department of Defense: Defense department and other Governmental Organizations involved with the research and development of defense strategies using Vetronics can use this report to support their research.

Decision Makers: The future investment and technology focus decisions could be formulated based on the inputs of this report.

Other Organizations: Various other NGO and Non- Governmental organizations involved with the research of the development department for upcoming technologies can use this report to support their research.
Print page | Download Sample pages