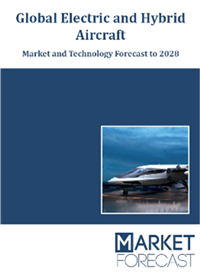 Between 2010 and 2019 a consistent upsurge has been noticed in the electrification of aircraft systems, research on electrical propulsion, and investments in electric or hybrid aircraft designs. Aerospace firms are joining forces to challenge their industry's growing contribution to greenhouse gas emissions, with electric engines seen as one of the answers. In simple terms, “hybrid electric” denotes two diverse sources of power, and on aircraft this means being propelled by kerosene and an electric battery.

Market Forecast’s latest report “Global Electric & Hybrid Aircraft - Market and Technology Forecast to 2028” examines, analyzes, and predicts the evolution of electric & hybrid aircraft technologies, markets, and outlays (expenditures) over the next 8 years – 2020 -2028 in the aerospace industry.  It also examines electric & hybrid aircraft markets geographically, focusing on the top 95% of global markets, in the United States, Europe, and Asia. In this report we analyze the market size of the Global Electric & Hybrid Aircraft market for the period 2020 – 2028. We primarily focus on the key markets – Americas, Europe, Asia, Middle East and Africa. As of now the United States remains the largest market for electric & hybrid aircraft followed by China and the European Union. Throughout the report we show how electric & hybrid aircraft are used today to add real value. To provide the most thorough and realistic forecast, this report provides a twin-scenario analysis, including “steady state”, emergence of new electric & hybrid aircraft technology. Companies are now unveiling new design plans for biofuel-powered hybrid plane for passenger and cargo transport. This is because bio fuel powered aircraft will reduce the cost it takes to operate aircraft, including fuel and asset costs.

In any given country, the armed forces are among the biggest consumers of fuel and other resources, and so have the greatest opportunity to readily reduce consumption by a significant amount.  For instance, the US Air Force is now using a 50/50 blend of regular jet fuel and camelina-based biofuel to power the F/A-18 Super Hornet multirole fighter jet, dubbed the "Green Hornet”. This proves that while every single aircraft is not a Hybrid Aircraft there is potential to use bio fuels to power existing aircraft.

In this report we have classified electric & hybrid aircraft under 5 major groups, apart from regions. We will research these 5 major groups and also provide forecast figures from 2020 – 2028.
These major groups are:

In particular, this report provides an in-depth analysis of the following:

Overview: Snapshot of the various electric & hybrid aircraft tech in the civilian and defense market during 2020-2028, including highlights of the demand drivers, trends and challenges. It also provides a snapshot of the spending with respect to regions as well as segments. It also sheds light on the emergence of new technologies
Market Dynamics: Insights into the technological developments in this market and a detailed analysis of the changing preferences of governments around the world. It also analyzes changing industry structure trends and the challenges faced by the industry participants.
Segment Analysis: Insights into the various Systems market from a segmental perspective and a detailed analysis of factors influencing the market for each segment.
Regional Review: Insights into modernization patterns and budgetary allocation for top countries within a region.
Regional Analysis: Insights into the Systems market from a regional perspective and a detailed analysis of factors influencing the market for each region.
Trend Analysis:  Key electric & hybrid aircraft system markets: Analysis of the key markets in each region, providing an analysis of the various Systems segments expected to be in demand in each region.
Key Program Analysis: Details of the top programs in each segment expected to be executed during the forecast period.
Competitive landscape Analysis: Analysis of competitive landscape of this industry. It provides an overview of key companies, together with insights such as key alliances, strategic initiatives and a brief financial analysis.