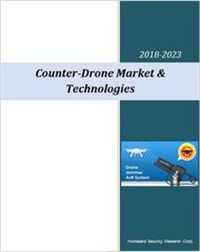 The potential threat posed by an inexpensive drone carrying a home-made bomb near an airplane or a football field is now apparent to everybody; however, little has been done to mitigate the issue. Counter-drone technology, also referred to as anti-drone, refers to systems that are used to detect and/or intercept unmanned aircrafts. These systems are also known as counter-UAS, C-UAS, or counter-UAV.

Airports, critical infrastructure, and even stadiums are on the lookout for the growing threat of drones. In the past 2 years, there have been numerous incidents of drones infiltrating secure airspace. Luckily, most of these events were not due to terrorist attacks, but rather small drones flying in the vicinity of airplanes, bases, or large public spaces. However, recent incidents, such as, the shut down of Heathrow airport, reports by the FBI that organized crime groups are using drones for their operations and Saudi security forces shooting down a drone near a palace belonging to King Salman, are only three examples indicating that crime and terror groups are starting to use drones as weapons.

The existing solution for these kind of threat is typically the use of anti-air missiles, but wasting an expensive missile on an inexpensive drone is not scalable and poses a threat to the nearby area, so alternative counter-measures are being tested. These new systems must be cheap, easy to build, and easy to learn how to use. Manufactures are working on 1st and 2nd generation drone defense solutions and products and it still remains to be seen which solution will become mainstream.

Anti-drone systems rely on a variety of techniques and technologies for detecting, tracking and/or intercepting drones. The systems can be ground-based, hand-held or UAV-based. Each platform has technological capabilities to either track & detect or intercept (countermeasure) a drone or have both options. Furthermore, each platform can be based on a different kind of technology to perform the task in hand, for example, radar, RF, IR, etc.

Countermeasure technologies include the following:

Platforms types include the following:

Questions answered in this market report include:

This report is a valuable resource for executives with interests in the industry. It has been explicitly customized for industry and decision-makers to enable them to identify business opportunities, emerging technologies, market trends and risks, as well as to benchmark business plans.