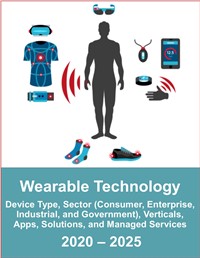 Overview:
This report evaluates the current state of the wearable technology ecosystem including devices, applications, and industry segments. The report addresses wearables in consumer and business use cases, key challenges, market players, and solutions. The report also provides an outlook for the future of wearable technology with forecasts for the period 2020 to 2025.

Wearable technology presents the potential for massive transformation in many industries. The more obvious ones include consumer electronics and communications. Early adopter industries include clothing, healthcare, sports and fitness. However, Mind Commerce sees many industries adopting wearable technologies as computing and wireless communications integrate wearable into virtually every aspect of products and services.

At the consumer level, increased perception of value and willingness to engage in wearable tech apps and services is building as new forms of communications, content, applications, and commerce become available. As WiFi6 is increasingly deployed in various public venues such as train stations and airports, companies will offer virtual reality as a means of infotainment and advertising, which will drive wearable technology sales and rentals. In addition, new consumer users of immersive technology will drive adoption and usage of wearable technology due to improved portability and mobility associated with 5G.
Mind Commerce sees several factors converging to facilitate wearable technology integration including expanded wireless capacity due to pervasive wireless (WiFi6, LTE, and 5G) and the need for wireless companies to establish new revenue streams, continuously decreasing cost of data, and the significant backing from huge companies including Google, Apple, and others. We also see developments in key technologies such as augmented reality, virtual reality, and next generation telepresence.