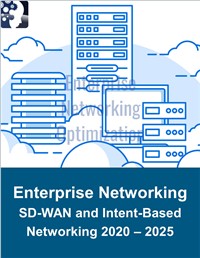 This enterprise networking optimization research analyzes the SD-WAN market including an evaluation of the players (vendors and service providers), strategies, technologies, and solutions. It includes analysis by Component, Appliance, Services, Deployment, Segment (Communication Service Providers, Enterprise, Industrial, and Government), and Enterprise Verticals with forecasts from 2020 to 2025.

It also evaluates the intent based networking market including comparison of IBN with traditional networking in terms of architecture, capabilities, and benefits for carrier and enterprise networks. The report analyzes technologies, infrastructure, and the impact of implementing intent-based networking in conjunction with other emerging technologies such as Multi-access Edge Computing (MEC), 5G, AI, and IoT. The report also evaluates leading vendors, strategies, and solutions.

SDN in support of Wide Area Networking (WAN), also known as SD-WAN, is rapidly achieving mainstream adoption as both network operators and enterprise take a software-centric approach to more optimally manage WAN operations and provide efficient access to cloud applications. Part of the reason for its popularity is the technology enables solutions that provide a more open hardware architecture configuration. This facilitates greater flexibility overall as well as ease of migration from proprietary boxes and multiprotocol label switching services, which is a dominant industry trend as networks increasingly utilize virtualized infrastructure and non-proprietary equipment.

Many consider SD-WAN part of the evolution of SDN as applied to existing networking technologies such as Multiprotocol Label Switching (MPLS), which directs data from one node to the next based on short path labels rather than long network addresses. SD-WAN was often applied as an overlay to existing network technologies such as MPLS virtual private networks and the Internet as a whole. SD-WAN saw early favor with enterprise networks on a managed service basis but has also gained great support with communication service providers (CSP) as a means of unifying networks that are increasingly becoming software-controlled and virtualized.

Intent Based Networks capture business intent, and in so doing, bridge the gap between business operations and information technology. The benefits of intent based networking are many and varied, but arguably all improvements stem from the ability for IBN to automate network management and orchestration in a proactive and intelligent manner. Accordingly, intent based networking represents a solution set that is at the confluence of a few key technologies including machine learning (and other forms of artificial intelligence), Software Defined Networking (SDN), and Internet of Things (IoT) technologies.

More specifically, intent based networking is defined largely by the extent to which network orchestration is automated, including software that may implement changes autonomously. Networks are increasingly becoming more self-aware and capable of dynamic optimization, often in real-time. In some cases, changes are made to enhance a current state. In other cases, remediation is required to adjust a sub-optimal condition or situation that has gone awry. Analysts see this as an area in which machine learning will become extremely valuable for IBN as AI will provide networks the ability to identify and learn from patterns and behaviors, leading to autonomous decision making, reducing human errors and costs while improving efficiency.