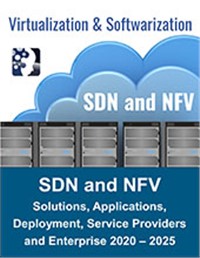 This research evaluates the network virtualization and softwarization market involving the implementation and operation of software defined networking and network function virtualization. The report evaluates both SDN and NFV for communication service providers and enterprise. The report provides SDN and NFV forecasts by solution, application, deployment mode, service providers and enterprise for 2020 to 2025.

Arising from the demands of pervasive cloud computing and changes in the way ICT groups approach networking, Software Defined Networking (SDN) represents a merging of hardware and software resources and networking functionality into a software-based virtual network.

The key concept of SDN is to move control out of the switches into a dedicated server that has a global view of the network state. This breaks fundamentally with existing principles of layer 2 and layer 3 networking where each switch has autonomous control.

An approach to building computer networks that separates and abstracts elements of these systems, SDN allows system administrators to rapidly provision network connections in mechanized fashion rather than manually configuring. In software architecture terms, SDN requires some method for the Control Plane to communicate with the Data Plane.

Virtualization within a computing context refers the act of creating a virtual version of a resource including, but not limited to a virtual computer hardware platform, operating system (OS), storage device, or computer network resources.

Various technologies are involved in virtualization including those that allow for interface between platforms over an Application Programming Interface (API).  One such API-dependent technology is SDN, which allows network administrators to manage network services through abstraction of lower level functionality.

SDN is often mentioned in one breath with Network Function Virtualization (NFV). Although SDN and NFV are often deployed together, they are separate concepts with different aims. NFV is a telecom led initiative that aims to utilize standard IT virtualization technology to consolidate many telecom network equipment types onto industry standard high-volume servers, switches and storage.

NFV relocates network functions such as soft switches, HSS, IMS, OSS and BSS from dedicated devices to generic virtualized servers.  One could say that NFV does for communications what server and storage virtualization did for computing.

NFV involves implementing network functions in software that can run on a range of industry standard server hardware, and that can be moved to, or instantiated in, various locations in the network as required, without the need to install new proprietary equipment.

SDN and virtualization are poised to transform network and service architecture thanks to improvements in technologies that offer improved performance and lower costs. However, some data centers use SDN but do not offer NFV as a service.  And although a less likely scenario, a service provider can support NFV without having an SDN enabled network.  In short, NFV usually runs over SDN enabled networks, but not all SDN networks need to provide NFV.

Many telecom initiatives, such as the implementation and operation of edge computing, are built upon the pillars of SDN, NFV, and cloud technologies. Mind Commerce sees many of these initiatives involving both SDN and NFV evolving to become increasingly applicable to many different CSP and enterprise environments and use case scenarios.

However, many efforts are silo-based, meaning that they are not cross-platform or cross-CSP.  This will continue to a certain extent, but we also see a developing need for a federated platform to act as a development environment as well as test-bed and field trial operations in a cross-technology, cross-service provider framework.  This platform will address SDN devices, controllers, and applications.