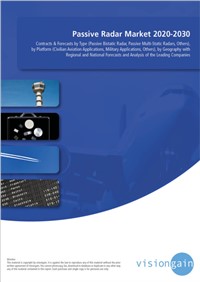 The passive radar market study analyses the market in global level and provides forecasts in terms of revenue (US$ million) from 2020 to 2030. It recognizes the drivers and restraints affecting the industry and analyses their impact during the forecast period. It identifies the significant opportunities for market growth in the next few years. In addition, the market is segmented on the basis of type, application and geography that is further divided into The Americas, Europe, Asia Pacific and rest of the world regions. In addition, the geographic regions are studied at country level for this research study. Furthermore, the passive radar market based on type is further segmented into passive bistatic radar and passive multi-static radars and others, and applications into civilian aviation applications, military applications and others. The key players have been profiled and the information covered are company overviews, financial information, business strategies and recent developments.

The global passive radar market is projected to grow from US$ 2,324 million in 2020 to US$ 4,313 million by 2030, at a CAGR of 6.38% between 2020 and 2030. Global passive radar market report is intended to be an overview of the market across two key submarkets, Passive Bistatic Radar and Passive Multi-Static Radars. This report contains estimates of the market values of these submarkets as well as values across key national markets. In addition, this report contains an overview and survey of the leading companies in the market. It also includes regional analysis based on various countries including US, Canada, UK, Russia, Denmark, Germany, France, China, Japan, and India. In addition, passive radar systems offer several key benefits. First, they are hard to detect by conventional means. Electronic sensors cannot pick them up because they do not transmit their own signals.

They have no dedicated transmitters generating heat, so they cannot be detected by their thermal signatures. And although the broadcast antennas are visible to the naked eye, they are generally small and quite difficult to spot. This high level of discretion is a major advantage in air surveillance, because potentially hostile or non-cooperative aircraft have no way of knowing that they are being watched. The second major benefit of passive radars is that they are relatively easy to set up. They do not operate in their own frequency band so there is no need to request frequency allocations before using them.

The Visiongain report analyst commented “Within 5-10 years, passive radar systems would likely be in a prime state with fully-fielded systems in place over the 10-15 years. Passive radar decreases electronic countermeasures in vulnerability systems and improves stealth target detection capability. Ongoing advancement in the passive radar industry would reject conventional ways to defeat enemy air defences, make it difficult to accomplish air superiority over passive radar opponents, and will need to adjust thinking to preserve US potential for power projection. The history of passive radar goes back to the early days of radar in the United Kingdom in 1935. The future of PCR will depend heavily on the emergence of incentives such as FM and electronic broadcasting networks.”