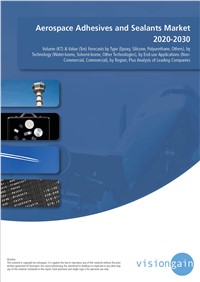 Drivers in the Global Aerospace Adhesives and Sealants Market 2020
Over the past few years, the adhesive and sealant industry has grown significantly internationally in the light of the expansion of technologies, including the aerospace and aeronautical industries. There are therefore a growing demand for high performance adhesives and sealants for this aircraft and space shuttle in extreme conditions. This has led to a significant growth of the adhesive and sealant industry over the past few decades. When side influences in demand and supply-side variables, the market for aerospace adhesives and densities are formed. Factors on the supply side include the availability of raw materials or additives used in or to make aerospace sticks and densities.

Growing aerospace operations in extreme conditions
In the past several decades, the aerospace industry has experienced a number of changes. The demand for high-efficiency aircraft and space shuttles increased significantly with technological developments and high-altitude flights. In fact, the need for space shuttles has increased significantly in the recent past with the rise in satellite launches and military operations. The space shuttles have to fly at extremely high temperatures while planes at high altitudes have to work under very low pressures. As a result, the efficient combination of the materials used for the bonding of surfaces and objects in the aircraft has become a primary need in the aerospace industry.

Increasing demand for lightweight composite materials
Increasing penetration of composition into the aircraft industry is projected to drive the global market of aerospace adhesives and sealants. The industries producing aircraft are using more lightweight materials in the assembly to boost the fuel efficiency of the plane by stressing light weight. The market for aerospace adhesives and sealants is increasing with expanded penetration of composite materials in aircraft. Another influential cause of the growth of the demand for aerospace adhesives and sealants is the increasing global aircraft production. The production of aircraft vehicles is mainly driven by increasing air traffic growth in emerging countries and growing urbanization in emerging countries such as China and India.

Innovations in adhesive technologies is expected to drive the global consumption of adhesives in aerospace industry
The adhesives are developed for various applications and with the combinations of adhesives and sealants under different conditions the role of adhesives in the product industry develops. In contrast, material advances for suppliers of adhesive and sealants become unavoidable as the build rate for commercial and non-commercial aircraft rises. In various uses in structural binding, adhesives are used to protect the connections within core components. Additionally, adhesive manufacturers now focus on developing multifunctional protection and lightning strike technologies to secure the aircraft under extreme circumstances. Furthermore, developments and improvements in adhesive technologies is expected to reduce the weight and cost of the aircrafts and its parts. This in turn is expected to augment the demand for adhesives and sealants in the aerospace operations in the years to come

What are the Opportunities to Explore in the Aerospace Adhesive and Sealant Market by 2020-2030?
In the next 10 years, a significant growth in the global market for aerospace adhesives and sealants is expected to hit 3.8 billion US dollars by 2030. by 2030. The international aerospace adhesive and testing market growth is projected to be in the wake of the opportunities offered by the Asia-Pacific and Latin American emerging markets. Increased air passenger traffic and growing procurement of aircraft from markets such as India and Brazil were anticipated to expand aerospace adhesives market opportunities in the forecast period. In addition, the market for adhesives and sealants will further increase in the forecast period with increasing military operations in the Gulf countries and in the Indian subcontinent.

Further competition for players in the market for aerospace adhesives and sealants should be created by advances in adhesive engineering. Moreover, increasing competition among the large players is expected to increase research and development expenses, resulting in the expected entry onto the market of high quality and more efficient aerospace adhesives during the forecast period.

Discover how to stay ahead
Our 157 page report provides 118 tables, charts, and graphs. Read on to discover the most lucrative areas in the Aerospace Adhesives and Sealants sector and the future market prospects. Our new study lets you assess forecast sales at overall world market and regional level. You will see financial results, interviews, trends, opportunities, and revenue predictions. Much opportunity remains in this growing Aerospace Adhesives and Sealants market.

Discover sales predictions for the world market and submarkets
Along with revenue prediction for the overall world market, you will find revenue forecasts to 2030 for the following segments:
Our investigation discusses what stimulates and restrains business. You will understand the dynamics of the industry and assess its potential future sales, discovering the critical factors likely to achieve success.

Leading companies and the potential for market growth
The global adhesives and sealants industry is projected to reach $2.2 billion in 2020 and is projected to reach $3.8 billion by 2030, which is projected to increase by 5.7% by 2020-2030. On the marketing and distribution hand, companies invest in innovation / R&D, brand development and cultivate strong customer partnerships to maintain their competitive position. Henkel, for instance, spent more than $300 million on research and development in its Adhesive Technology sector in 2015 and accounts for approximately 30% of its adhesive sales from products introduced during the past 5 years. Another instance is Bostik which, together with other local brands, is streamlining its portfolio of 40 brands into a global Bostik product. Bostik incorporates this initiative to streamline and strengthen advertising in order to increase visibility around the Bostik name. Cost-focused efforts include improved efficiency and construction by capital and M&A in manufacturing and supply chain. For example, H.B. Fuller recently set a target for manufacturing costs reduction by 200 basis points by focusing more on sourcing efforts, manufacturing excellence and infrastructure investment between 2015 and 2020. The successful formulators are incredibly savvy when it comes to balancing growth investments with cost management in order to maximize long-term profitability and competitiveness.