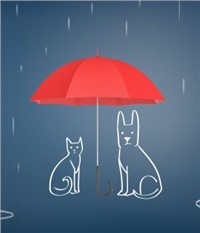 The global pet insurance market is expected to grow at a CAGR of over 20% during the period 2019–2025.
The global pet insurance market is catching pace in several developed as well as developing countries. The rise in pet ownership has paved the way for several developments in the industry in recent times. Issued under the property insurance category, pet insurance is in the introductory growth stage in most countries. The rapid growth in the number of animal owners in the past decade across the globe, especially in the US, Canada, the UK, and Sweden, where dogs and cats are treated as a family members is expected to influence the market significantly.

The increasing popularity of pet humanization concept is increasing the demand for pet grooming and care products. Owners, especially millennials, are willing to spend more on their animals to ensure a healthy and secure life. The US household spent more than $72 billion in 2018 on pet medical insurance care, which is 4.5% higher than in 2017. Pet food and related products earned a revenue of more than $45 billion in Europe in 2018. Hence, the increased interest of European animal owners to spend is likely to opt for animal protection cover. Europe constituted the largest market for pet health insurance in 2018, which is expected to grow during the forecast period.

The accident and illness policies segment is expected to witness an incremental growth of over $8 billion by 2025. With more than four million cats as pets, Australia has one of the highest vendors’ presence, which is likely to drive the country as the forerunner in the pet insurance market in APAC.

The following factors are likely to contribute to the growth of the pet insurance market during the forecast period:


The study considers the present scenario of the pet insurance market and dynamics for the period 2019?2025. It covers a detailed overview of several market growth enablers, restraints, and trends. The report covers both the demand and supply aspects of the market. It profiles and examines leading companies and other prominent companies operating in the market.

The research report includes detailed segmentation by insurance type, animal type, distribution, and geography. In terms of coverage, the accident and illness segment is the most significant contributor to the global pet insurance market. This segment covers the reimbursement for accidents as well as illness, including hereditary conditions and behavioral challenges among them. While a majority of insurers offer this policy, most plans, ranging from premium to advanced, depend on the age and breed of the animal. Since the owners are willing to spend on pet welfare and prevent expensive veterinary bills, the segment is expected to increase its reach during the forecast period. The increased willingness to adopt additional coverages for a lifetime by animal owners in North America and Europe is likely to boost the segment further.

Although the accident and illness plans cover a majority of the market share, the increasing premium with the rise in the age of the pet is a hindrance to the segment growth. Hence, the cost-effectiveness offered by accident only plans is a significant factor for the acceptance of this segment. Also, several owners in developing economies such as APAC are likely to opt for accident-only plans due to low awareness of other insurances.

While the pet insurance concept is in the nascent stage world over, the policies are most commonly adopted for dogs and cats. The popularity of the humanization concept is increasingly affecting the adoption of dogs, thereby leading to wellness concerns. With more than 26% of UK adults adopting a dog, it is the largest market for dog insurance. The European region is expected to the largest growing market during the forecast period.

Insurers are increasing their efforts to reach customers as the conversion ratio of potential customers to loyal ones could be a challenge. Moreover, low awareness of insurance adds to the burden. Effective distribution channels can be a vital enhancer in terms of reach and scope. Agencies are the most preferred medium, as most insurance sales are expected to take place during the forecast period. Since agencies have a direct relationship with animal owners, pre and post-sale services remain intact.

Brokers are one of the efficient indirect distribution systems. They specifically target middle class and upper-class animal owners. The share of this segment is growing significantly due to the increased efforts put by brokers. Bancassurance is expected to be the fastest-growing segment during the forecast period due to the low distribution and maintenance costs. With the growing number of pets in the regions of North America and Europe, brokers and direct writers have relatively low penetration, which can be increased in the coming years. Agency is the most successful and prominent mode that should be executed in the same way with the capitalization of markets in growing economies of Latin and MEA countries.

The global pet insurance market is concentrated in North America and Europe, with a large number of vendors. With the growing awareness and perception of the benefits acquired from the policies, there is a huge possibility of animal owners getting involved with the concept of insurance in the under-penetrated and developing nations of APAC, MEA, and Latin regions.

Europe was the largest market, with over 53% share of the global market in 2019. With more than 102 million cats, 85 million dogs, and around 50 million birds as pets, the region is expected to contribute significantly toward the adoption of protection cover policies. The concept of humanization and the growing preference toward the pet industry are vital drivers for the market.

APAC is estimated to be the third-largest market, with the growing animal ownership, changing demographics, socio-economic conditions, and trending humanization concept driving the market growth. The market in Latin America is dominated by Brazil and Mexico, which are also one of the largest markets for pet-related products in the world. Brazil is one of the largest pet populated countries across the globe, which is filled with abundant dogs of large breeds for guarding purposes too. South Africa is the largest market in the MEA region. Middle to high-income consumers are particularly driving the premium pet insurance market in South Africa.

APAC
Europe North America MEA
Key Vendor Analysis
The pet insurance market is in the growing stage, and it has been penetrating European countries such as Sweden, the UK, and the US. The market consists of a high number of concentrated players, making it highly fragmented with intense competition. In countries such as the US, there are 4–5 major players, which are comprising more than 75% of the total market. However, there are no major players in the UAE and Saudi, where there are immense opportunities for vendors to expand their business. The US region is under-penetrated with large potential to be addressed. Since the market is dominated by major players such as Nationwide, Trupanion, ASPCA, and Petplan, competitors and new entrants can differentiate their products by low-cost policies, strengthening through partnerships with veterinary clinics and low waiting periods. Since the globalization is limited, foreign-owned agencies are lower than dominant domestic providers. This can open opportunities for emerging vendors. Mergers and acquisitions can help companies to expand the penetration level and expansion strategies, which are key to the insurance industry.