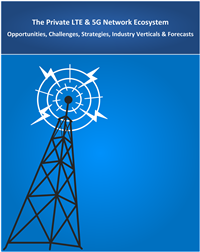 With the standardization of features such as MCX (Mission-Critical PTT, Video & Data) services and URLCC (Ultra-Reliable Low-Latency Communications) by the 3GPP, LTE and 5G NR (New Radio) networks are rapidly gaining recognition as an all-inclusive critical communications platform for the delivery of both mission and business critical applications.

The very first private 5G networks are also beginning to be deployed to serve a diverse array of usage scenarios spanning from connected factory robotics and massive-scale sensor networking to the control of AVGs (Automated Guided Vehicles) and AR/VR (Augmented & Virtual Reality). For example, Daimler’s Mercedes-Benz Cars division is establishing a local 5G network to support automobile production processes at its "Factory 56" in Sindelfingen, while the KMA (Korea Military Academy) is installing a dedicated 5G network in its northern Seoul campus to facilitate mixed reality-based military training programs – with a primary focus on shooting and tactical simulations.

In addition, with the emergence of neutral-host small cells, multi-operator connectivity and unlicensed/shared spectrum access schemes, the use of private LTE and 5G networks in enterprise buildings, campuses and public venues is expected to grow significantly over the coming years. The practicality of spectrum sharing schemes such as the three-tiered CBRS (Citizens Broadband Radio Service) framework and Japan’s unlicensed sXGP (Shared Extended Global Platform) has already been proven with initial rollouts in locations such as corporate campuses, golf courses, race tracks, stadiums, airports and warehouses.

A number of independent neutral-host and wholesale operators are also stepping up with pioneering business models to provide LTE and 5G connectivity services to both mobile operators and enterprises, particularly in indoor settings and locations where it is technically or economically not feasible for traditional operators to deliver substantial wireless coverage and capacity.

Expected to reach $4.7 Billion in annual spending by the end of 2020, private LTE and 5G networks are increasingly becoming the preferred approach to deliver wireless connectivity for critical communications, industrial IoT, enterprise & campus environments, and public venues. The market will further grow at a CAGR of 19% between 2020 and 2023, eventually accounting for nearly $8 Billion by the end of 2023.

SNS Telecom & IT estimates that as much as 30% of these investments – approximately $2.5 Billion – will be directed towards the build-out of private 5G networks which will become preferred wireless connectivity medium to support the ongoing Industry 4.0 revolution for the automation and digitization of factories, warehouses, ports and other industrial premises, in addition to serving other verticals.

The report comes with an associated Excel datasheet suite covering quantitative data from all numeric forecasts presented in the report.

Next Generation Network Optimization Market by AI in Networking, Experiential and Intent-based Networks, Virtualized and...