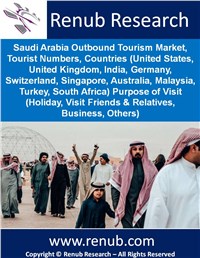 In the recent years, the Kingdom of Saudi Arabia has witnessed a significant growth in the outbound tourism market including the number of trips and the total night spent across overseas. As per our study, the number of night spent by Saudi tourist overseas was only 26 million nights in 2006, while they spent more than 250 millionin 2015. The main reason driving the night spent by Saudi Arabia in foreign country is lack of entertainment in the country.

Moreover, due to swift advancement of smartphones and improved internet access has led to noteworthy development in tech-savvy customers in the Saudi Arabia; most of them belong to “generation Z”. With greater usage of web-based social networking websites and ease of using online platforms, these types of customers prefer using internet booking websites. Saudi Arabia Outbound Tourism market expected to be more than USD 43 Billion by the end of year 2025.

Holiday segment is the most popular tourism segments among all other segments of Saudi Arabia Outbound Tourism. The other 3 segments covered in the report are Visit Friends and Relatives (VFR), Business (MICE) & Others (Education, Medical Treatment). This report offers complete analysis of tourism type from different viewpoints such as market, visitor numbers, market share, visitor share etc by country wise.

In this reports, we have done the analysis for 10 destinations of Saudi Arabia Outbound Tourism. Turkey, United States, United Kingdom, Switzerland and Malaysia are some of the preferred destination by Saudi Arabia tourists. In this report, we have done comprehensive analysis of each country in terms of number of Saudi Arabia tourist visit, market & forecast and number of associated factors that impacted Saudi Arabia Outbound Tourism. The ten countries studied in the report are as follows: United States, United Kingdom, India, Germany, Switzerland, Singapore, Australia, Malaysia, Turkey and South Africa.

Tourism Types Covered in this report