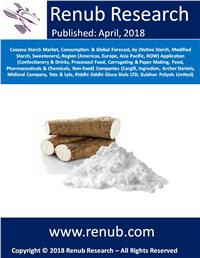 Cassava is the increasingly popular feed material for starch extraction. Cassava is the oldest source for starch, after maize, wheat or potato. Cassava leaves have the healthiest form of protein and beta-carotenoids, are also used as a vegetable and forage in the world. Cassava raw material is a relatively inexpensive source for starch, which has three types: native, modified & sweetener. The cassava starch market will represent a considerable CAGR growth over the forecast period. According to the Global Cassava Starch Market will surpass US$ 8.1 Billion by 2026.


Almost half per cent of world cassava consumption is concentrated in two Regions, namely America and the Asia Pacific. Cassava is increasingly popular, particularly in African countries due to its production and rapidly increasing populations. In the world cassava market, Thailand is the leading producer followed by Vietnam and Cambodia through their production level was not as high as that of Nigeria. Apart from cassava processing into foods, this can also be processed for feeding animal, confectionery & drinks, Corrugating & Paper Making, Non-food and Pharmaceuticals & Chemicals. The growth of the cassava starch market in the future appears to be very promising due to its usage in Indonesia, United States, China and other countries.


The global cassava starch market has been divided into

The report has been studied from 2 vital points.

Segmentation based on Products

Segmentation based on Region

Segmentation based on Industry