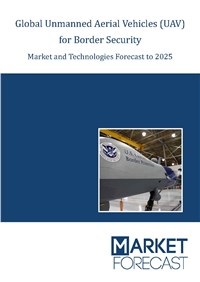 News articles routinely include border security as governments struggle to find terrorists and criminals in the flood of immigrants looking for a better life.  Internal security is increasingly part of those stories as various groups and individuals attack civilians from within their own nations.  Many, but certainly not all, nations use a single security service for all such domestic threats.

Unmanned Aerial Vehicles (UAVs) have been part of that security effort for more than a decade, with rich nations like the United States and Brazil flying very expensive aircraft on their borders.  You’d think UAVs would then be an easy sale to any nation with such problems.  You’d be wrong, and sometimes right.

Yes, this is a confused and confusing market.  This new report cuts through that confusion to first explain the technologies involved and then forecast their markets by regions.  It adds value to that insight with two scenarios, one covering today’s reality and one forecasting each region’s reaction to a successful cross-border terror attack.  The results are unexpected given the complexities of national privacy laws (affect internal security operations) and military inventories (allow security agencies to immediately increase border patrols without buying UAVs).

Who is This Report For?
If you have anything do with security along borders or within a nation, this report is a must, particularly if you are a:
Multiple Scenarios