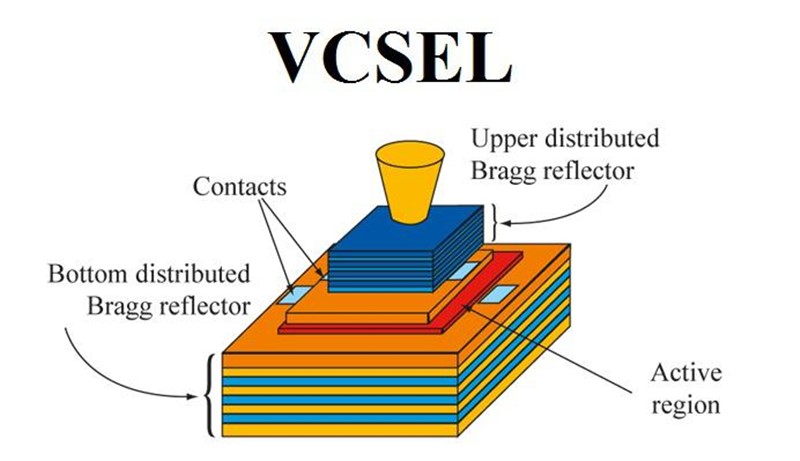 According to the research report "VCSEL Market by Type (Single-mode, Multimode), Material (GaAs, InP, Others), Wavelength, Application (Sensing, Data Communication), Industry (Consumer Electronics, Automotive, Data Center, Commercial & Industrial), and Geography - Global Forecast to 2025", The global VCSEL market size is expected to grow from USD 1.0 billion in 2020 to USD 2.9 billion by 2025, at a CAGR of 23.7%. The increasing applications of VCSELs in data communication has fueled the demand for VCSELs. The increasing adoption of 3D sensing applications in smartphones is expected to play a vital role in the growth of the VCSEL market.

Automotive segment to register the highest CAGR during the forecast period
The automotive segment is expected to exhibit the highest CAGR during the forecast period. The use of VCSELs is increasing in autonomous vehicles for LiDAR, sensing, in-cabin monitoring/driver monitoring, and gesture recognition. The growing need to increase safety levels in vehicles and increasing interests of OEMs in the manufacturing of autonomous vehicles are driving the demand for VCSELs. VCSELs are finding increased applications in systems such as advanced driver assistance systems (ADAS). LiDAR is the latest technology used in automotive safety developments and solutions that are an excellent match to radar and vision systems nowadays. The increasing transition toward the adoption of connected/autonomous vehicles is projected to drive the growth of the market.

GaAs-based VCSELs to register the highest CAGR in the VCSEL market during the forecast period
The demand for GaAs-based VCSELs is expected to grow at a significant rate from 2020 to 2025. Gallium arsenide material exhibits properties that are conductive to VCSEL lasing. Most of the VCSELs used in different applications are manufactured using GaAs material. Data communication and consumer devices are two major application areas of GaAs-based VCSELs. The integration of VCSELs for 3D sensing in Apple’s iPhone X paved the way for the GaAs ecosystem. The high adoption of GaAs-based VCSELs in the manufacturing of smartphones and consumer devices is the prime factor increasing the demand for wafers & VCSELs in the market. Also, the high use of GaAs in LiDAR applications is expected to create growth opportunities for the players operating in the ecosystem.

Major players in the VCSEL market include II-VI (US), Lumentum (US), ams (Austria), TRUMPF (Germany), Broadcom (US), Leonardo Electronics (US), MKS Instruments (US), Santec (Japan), VERTILAS (Germany), and Vertilite (China).