Threats and Attacks from Domestic Terrorist Groups Helps Drive the Bangladeshi Defense Industry, According to a New Study on ASDReports 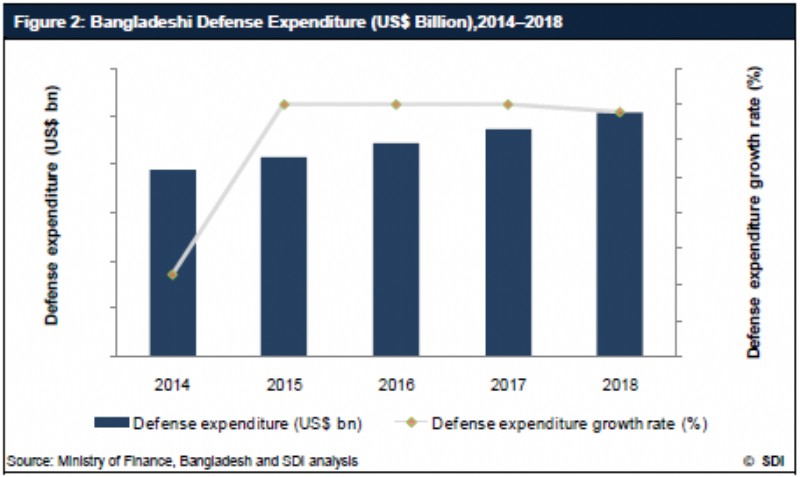 Bangladesh’s burgeoning military sector is set to continue the healthy growth exhibited over the last five years, according to the new report now available on ASDReports, which predicts a CAGR of 6.5% between 2014 and 2018, thanks to the government’s well-defined military modernization plans and the country’s active and consistent participation in peacekeeping missions.


KEY MILITARY MARKET DRIVERS
Organizations seeking to capitalize on the potentially lucrative forecast growth in the Bangladeshi military sector must be sensitive to the drivers of this growth.

Bangladesh, like every country, aims to have a prudent and skilled Army, Navy and Air Force – for which a modern military base is essential. To protect the nation from internal and external aggression, as well as to establish and maintain peace within the nation, it is necessary to procure modern and high-tech arms, ammunitions and war-equipment that will enhance the combat capabilities of the armed forces. Furthermore, an efficient military unit also requires necessary training related to the advanced warfare techniques, and have a well-connected and secured communication network.

To achieve this goal, the Bangladeshi government outlined a 10 year modernization plan in 2010, which is expected to value US$490 million, and will see expenditure on the purchase of military hardware, as well as the development of indigenous ordinance production.

Peacekeeping Missions
Through its association with the United Nations, Bangladesh has been contributing both civil and military personnel towards worldwide peacekeeping operations. Over the last 25 years, Bangladesh armed forces have played a crucial role in establishing and promoting international peace and security under the UN Peacekeeping Operations (UNPKOO), operating in troubled regions such as Afghanistan, Angola, Bosnia, Burundi, Cambodia, Congo, East Timor, Sierra Leone and Syria.

Presently, Bangladesh has deployed military personnel on crisis management missions in Liberia, South Sudan, Lebanon, Western Sahara, and Haiti, and at the end of October 2013 contributed a total of 7,941 personnel (including 6,057 troops) to the UN, and this commitment to supporting peace-building operations across the globe is expected to account for a large portion of its defense expenditure in the coming years.

Future of the Bangladeshi Defense Industry