Domestic and foreign threats, combined with drive to attain NATO membership will see Georgia’s defense spending increase to 2018, according to a new study on ASDReports 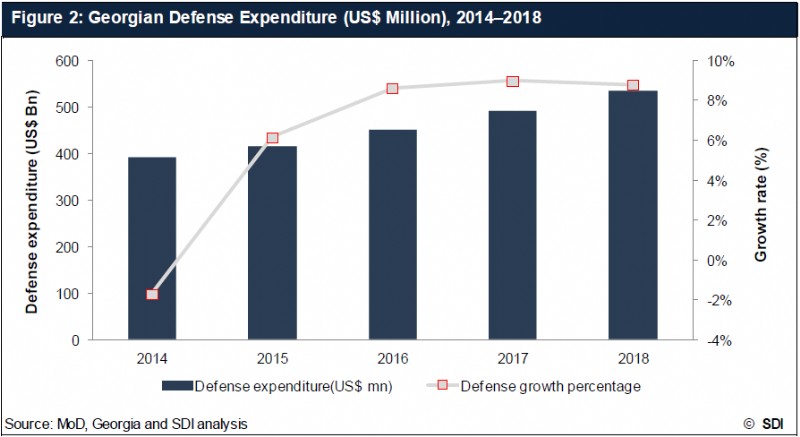 The report on ASDReports says, slow economic recovery following the 2008 war with Russia, political instability, and shifting government spending priorities designed to support economic development and stability have seen Georgia’s defense budget decline at a CAGR of -7.2% between 2009 and 2013, now standing at US$398. Despite this, robust spending has been forecast by recently released research by Strategic Defence Intelligence, driven by fears of future threats from Russia, the Defense Ministry’s military modernisation plans, NATO membership requirements, and security concerns in the build up to next year’s Sochi Winter Olympics. This is expected to stimulate growth at a CAGR of 8.13% over the next four years, reaching a peak of USD$535.4 million by 2018.

The primary objective of Georgia’s military is currently the enhancement of its capabilities to the point where they meet the membership requirements of NATO. These requirements include: democracy, respect for human rights, economic stability, interoperability with NATO forces, and resolving conflicts within the country and on its borders.
The desire to gain full membership of NATO is considered to be the primary driver of Georgia’s defense expenditure until 2018.

The volatility of Georgia’s relationship with Russia, stemming from the separatist regions of South Ossetia and Abkhazia, was brought to a head in 2008, when Russian forces entered South Ossetia with armoured and motorized infantry forces and air power. The war lasted for five days, and caused damages of US$224 million, precipitating strained trade relations and stunted economic growth.

Following the ceasefire, no peace treaty was signed between the two nations, and Georgia’s desire to regain control of the South Ossetia and Abkhazia is in direct contention with Russia’s demands that they be recognized as independent states. As such, Russia remains a major threat to Georgia, which requires the country to be combat-ready, and also increase its internal security in case of an unforeseen attack. Thus, despite the newly elected democratic government’s desire to shift expenditure away from the defense budget towards initiatives designed to support economic stability, the geo-political conditions demand it continue to make significant investments in its defense capabilities.

Motivated by both the impending threat of Russia, and the NATO membership requirements, the Georgian Defense Ministry has highlighted military modernization as one of its core objectives over the next three to five years. This will see investment in equipment, technology, command systems and training in order to bolster the country’s offensive and defensive capabilities.
There is evidence that this initiative is being realised, with the first three months of 2013 seeing 55 public tenders announced, with 26 of them already carried out; this is a stark contrast to 2012, when only 17 such tenders were carried out.

The recent Boston marathon attack has seen fear of terrorist attacks on sporting events flare up dramatically, and has added to pre-existing security concerns regarding the Sochi Winter Olympics 2014. This is due to Sochi’s proximity to both the conflict-plagued North Caucasus region – where Al-Qaeda has been gaining a strong footing - and Chechnya. This is driving homeland security expenditure in Georgia, which is expected to grow at a CAGR of 7% to reach $438 million by 2018, with the procurement of biometric systems, x-ray machines, computer, communication, and alarm systems.

Future of the Georgian Defense Industry

Future of the Georgian Defense Industry - Market Attractiveness, Competitive Landscape and Forecasts to 2023