A high burden of chronic diseases, improving regulatory guidelines, according to a new study on ASDReports 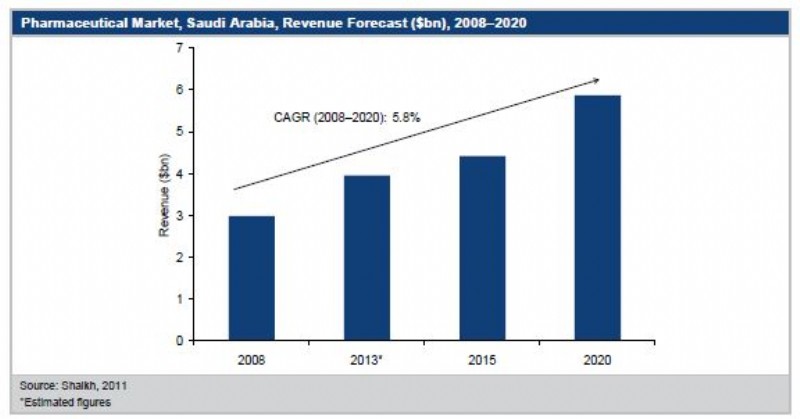 A high burden of chronic diseases, improving regulatory guidelines and the launch of new products will provide the necessary impetus for the growth of the pharmaceutical market in Saudi Arabia

The Saudi pharmaceutical market is one of the largest markets in the Middle East and the largest among the Gulf Co-operation Council (GCC) members. It was valued at approximately $4 billion in 2013 and is projected to reach $5.9 billion in 2020 at a Compound Annual Growth Rate (CAGR) of 5.8% (Shaikh, 2011).

Increasing access to medicines, increasing affordability and increasing general awareness of common diseases are the other factors that will drive the pharmaceutical market.

The major multi-national pharmaceutical companies in Saudi Arabia are GlaxoSmithKline (GSK), Pfizer and Novartis. Saudi Pharmaceutical Industries and Medical Appliances Corporation (SPIMACO) and Tabuk are the major local players. Imports accounted for 82.4%, or $3.1 billion, of the pharmaceutical market in 2012.

The Saudi Food and Drug Authority (SFDA) is responsible for ensuring the safety of food and drugs as well as biological and chemical substances. The main task of SFDA is to regulate, manage and control food, drug, medical devices as well as setting up of compulsory standard specifications, whether they are imported or locally manufactured.

SFDA has established an online application and registration system for market authorization procedure, and the applicant can also now provide the information for the application in either English or Arabic or both. This benefits local and foreign pharmaceutical companies, as language will cease to be a barrier for them. The SFDA has also unified the various marketing-authorization application processes. It also extended the time limit for submitting documents by the applicant, when SFDA asks the applicant for specific data.

Saudi Arabia became a member of the World Trade Organization (WTO) in December, 2005. Prior to its accession, Saudi Arabia reformed its trade administration by revising legislation on import licensing, standards and technical regulations, intellectual property protection, and customs valuation and fees (Issa and Mostafa, 2009).

Saudi Arabia has taken significant steps towards making its trade regime consistent with the Trade-Related Aspects of Intellectual Property Rights (TRIPS) agreement and has incorporated the provisions of the agreement in its legal system and practice. Saudi Arabia is fully TRIPS compliant. This will bring foreign investments and also promote licensing manufacturing agreements between the multi-national proprietary drug producers and local manufacturers (WIPR, 2012).


The healthcare system is in its developmental stage. The percentage of Gross Domestic Product (GDP) spent on health was estimated at 3.2% in 2013 (World Bank, 2014i). The Cooperative Health Insurance Act in 1999 enabled the launch of a new health insurance program that provided cover to the whole population (Saudi and non-Saudi). The government planned to implement new regulations for cooperative insurance in 2014. It decided to increase the maximum insurance coverage to SAR500,000 ($133,361) for all new entrants into Saudi Arabia, which will be effective from July 2014 (CCHI, 2014).

In its 2014 budget, the government gave priority to education, allocating approximately $0.8 billion to building new school and $56 billion, or 25% of the total proposed budget, to education, overall. Its planned expenditure on health and social affairs was $28.8 billion, an increase of 8% over its expenditure on health and social affairs in 2013. The government has also planned 11 new hospitals, 11 new medical centers and 10 new comprehensive clinics, in 2014. It has allocated approximately $18 billion to developing infrastructure and transportation.

At the same time, Saudi Arabia’s IT expenditure was projected to increase by approximately 6.6% to SR15.3 billion ($4.1 billion) in 2013. These parallel developments are expected to open up major opportunities in healthcare-related cloud computing adoption and investments in smart systems (Saudi Gazette, 2013).

Saudi Arabia is an oil-dependant country, and the greater part of its revenue is generated by the oil sector. It has an oil-based economy with strong government control over major economic activities. It possesses approximately 25% of the world’s oil reserves and plays a leading role in the Organization of the Petroleum Exporting Countries (OPEC). In 2013, its GDP was valued at $745.3 billion. Saudi Arabia’s strong and consistent economic performance over the past decade was due to efficient and sound financial sectors. The main contributors to the Saudi economy, other than oil, are mining, quarrying and manufacturing and the finance and insurance sectors (CDSI, 2014).

In 2013, the oil revenues of Saudi Arabia declined by 11%. The strong growth in the private sector moderated the impact of the oil sector decline, pointing again to the importance of economic diversification and the need for encouraging the private sector to have a major share in the GDP. The manufacturing and construction sectors are two of the non-oil sectors that the government is looking to in its efforts to reduce its dependence on the oil sector.

Government expenditure increased by 15% in 2013 to $247 billion (Aluwaisheg, 2013). The government has introduced five-year plans since 1970, and currently the Ninth Development Plan (2010–2014) is in operation. The Ninth Development Plan’s main initiative is to eliminate poverty and increase the development of infrastructure, medical services, education and residential housing. The plan also aims at increasing the employment ratio of Saudis in the private sector.