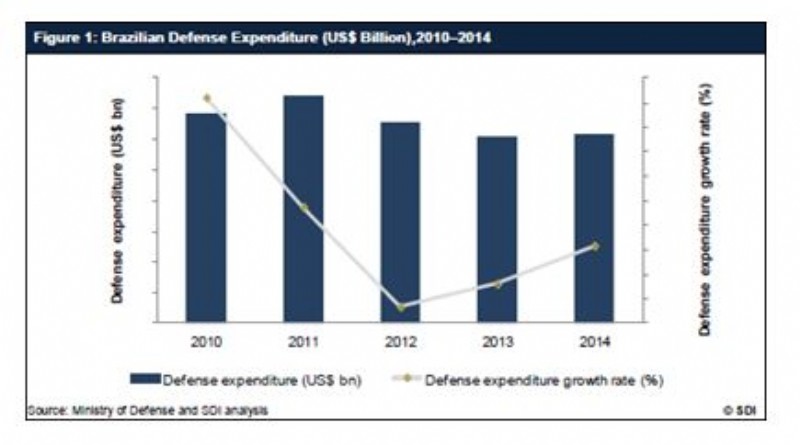 The Brazilian defense industry is one of the fastest-growing global defense markets, and aims to decrease its dependence on foreign OEMs (original equipment manufacturers) by enhancing its domestic defense capabilities. The country‘s capital expenditure grew at a CAGR of 5.8% over the review period and is expected to record a CAGR of 9.40% during the forecast period, to reach a value of US$18.20 billion by 2019, Future of the Brazilian Defense Industry – Market Attractiveness, Competitive Landscape and Forecasts to 2018.

This report provides in depth analysis of the Brazilian defense market, with identification of market drivers augmenting its provision of data on the current industry size and growth expectations to 2018. Together with its investigation of the industry structure and procurement dynamics, with analysis of the competitive landscape of the Bangladeshi defense industry, and its assessment of the business environment, Future of the Brazilian Defense Industry – Market Attractiveness, Competitive Landscape and Forecasts to 2018 should be considered required reading for those serious about capitalizing on the significant opportunities it holds.

During the forecast period, Brazil‘s defense expenditure will be driven by the following factors:

The Brazilian MoD is increasing efforts to replace its aging military systems and equipment acquired during the Soviet era. The country is expanding its naval fleet to increase regional maritime security by procuring Amazonas Class Ocean Patrol Vessels from UK and France. Furthermore, in an agreement signed with France in 2008, Brazil jointly manufacturing four Scorpene attack submarines, anticipated to enter service in 2017 along with a nuclear-powered submarine to be commissioned in 2023. Additionally in 2013, the Brazilian Air Force has chosen Saab‘s Gripen over other prospects which included Dassault‘s Rafale jet and Boeing‘s F/A 18 Super Hornet under a US$4.5 billion contract to provide 36 fighter jets by 2020.The country‘s defense ministry is also currently in the process of strengthening its military ties with Russia having initiated a US$1 billion planned procurement of anti-aircraft missile batteries.

Brazil‘s ambitious international sporting events are anticipated to boost the country‘s spending on the homeland security during the forecast period. Millions of spectators are expected to attend the 2014 Football World Cup and 2016 Olympics, which will take place in Brazil and will require additional security. The country has invested significantly in command and control centers, training, and security equipment such as mobile police stations, boats, cameras, anti-bomb systems, video-walls, radio communications, media intelligence monitoring, video monitoring and cyber security software


Reasons to buy:
•    Understand the current trends analysis of imports and exports, together with their implications and impact on the Brazilian defense industry.
•    Understand the competitive landscape of the defense industry in Brazilian, and an overview of key defense companies, both domestic and foreign, together with insights such as key alliances, strategic initiatives, and a brief financial analysis.
•    Identify possible ways to enter the market, together with detailed descriptions of how existing companies have entered the market, including key contracts, alliances, and strategic initiatives.
•    Confidently update your strategic and tactical plans based on a proper understanding of the future pattern of market trends from winners and losers to category dynamics.

Future of the Brazilian Defense Industry