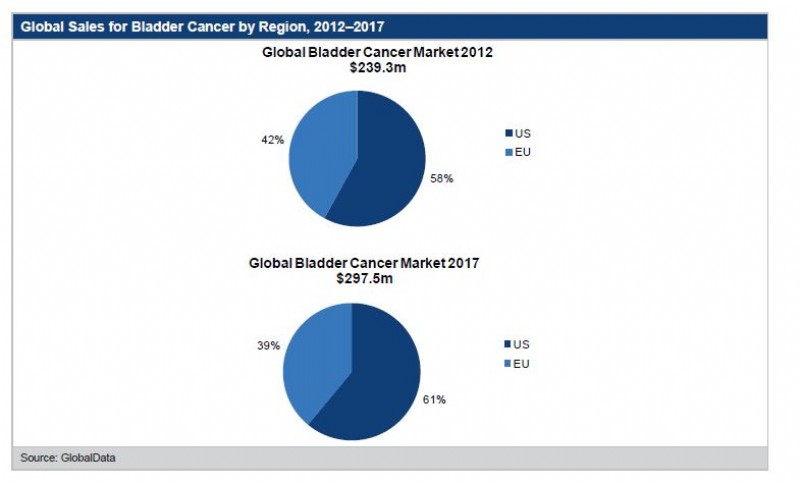 Despite the Launch of Spectrum Pharmaceuticals’ EOquin, Nominal Growth in US and EU Bladder Cancer Market Is Expected from 2012 to 2017

This new report estimates the bladder cancer market in the US and 5EU (France, Germany, Italy, Spain, and UK) in 2012 to be valued at $239.3m. This market is defined as the sales of branded drugs, including Valstar (US only) and Javlor (Europe only), and major generics regimens across both markets. Predominantly due to the higher price of drugs, the majority of sales were generated in the US market, $139.4m (58%), with EU sales estimated to be $99.8m (42%).

By the end of the study period in 2017, analysts forecast global sales in the bladder cancer market to increase to $297.5m, at a compound annual growth rate (CAGR) of 4%. The majority of sales at this point will still come from the US, with $181.1m (61%), with its market share increasing marginally from 58% in 2012 to 61% by the end of the forecast period. Overall, analysis expect an increase in market size primarily due to a forecast increase in number of incident cases across the study period in the 6MM and the entrance of EOquin into the market during the forecast period.

he emergence of Spectrum Pharmaceuticals’ EOquin, the only product in the pipeline to enter the market during the forecast period, will also have a small incremental effect on the bladder cancer market. Global sales for EOquin will account for $13.2m in its launch year, 2016, and $26.1m in 2017, accounting for 8.8% of sales in that year.

There are several major drivers of the bladder cancer market in the US and 5EU.

Interviewed experts report the level of unmet need in the bladder cancer market to be high, both in the early-stage, non-muscle invasive bladder cancer (NMIBC) and the late-stage muscle-invasive and metastatic settings. Little progress has been made over the past 10 years that has significantly changed the treatment algorithm for patients or provided more efficacious treatment options. Analysts have identified better cure rates for NMIBC patients to be one of the key unmet needs.

NMIBC is the largest patient population in bladder cancer, accounting for 70% of all newly diagnosed cases. Long-established treatments such as BCG and mitomycin c are the mainstay in this setting. However, approximately 70% of patients will relapse after treatment. Patients with advanced or metastatic disease are not better served either: first-line therapy consists of a gemcitabine-cisplatin regimen, as there are no targeted therapies that have been approved in this setting.

Concomitantly, KOLs call for the identification of predictive biomarkers that would allow improved identification of NMIBC patients who are the most likely to relapse, or to inform on different treatment strategies.

A Clear Lack of Clinical Developments for Bladder Cancer

Late-stage clinical development in bladder cancer is poorly served. Only one drug is being investigated in a full-fledged Phase III program (EOquin, NMIBC setting) and only a handful of drugs are being evaluated in Phase II company-sponsored trials. In the metastatic setting, most of the developments are being conducted by independent investigators and are therefore not designed to gain regulatory approval. However, if conclusive, they are likely to contribute to the off-label use of commercially available drugs, especially if they are targeting a segment where large unmet needs remain, such as metastatic bladder cancer.

Additionally, these independent trials are likely to be scrutinized for early signals of efficacy that can then be pursued through more solid, large-scale, company-sponsored trials. This “back seat” methodology provides a strategic position to maximize rewards while minimizing risks.