Future of the Iraqi Defense Industry - Market Attractiveness, Competitive Landscape and Forecasts to 2018 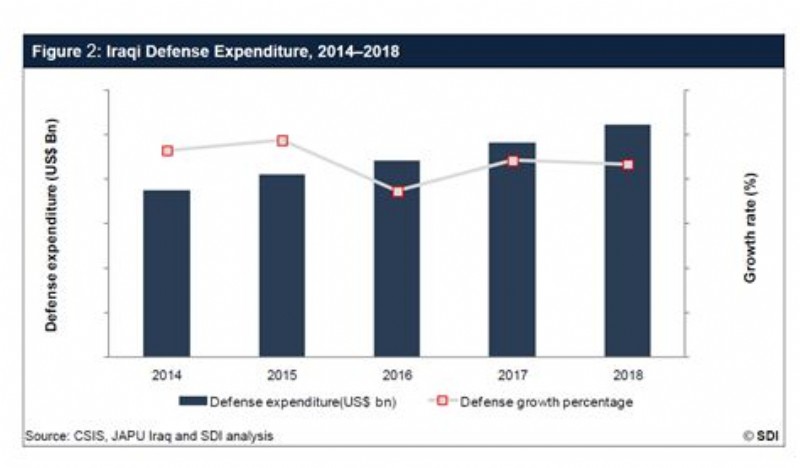 Following the end of Operation Iraqi Freedom, Iraq is undergoing a significant period of national reconstruction that will see its defence expenditure rise at a CAGR of 8.68% over the next five years, according to Strategic Defence Intelligence’s new report: Future of the Iraqi Defense Industry – Market Attractiveness, Competitive Landscape and Forecasts to 2018. Despite this being a slower rate of growth than the CAGR of 15.56% exhibited between 2009 and 2013, Iraq’s defense market is still set to reach a value of US$26.2 bn by 2018 – growth primarily driven by the predicted growth of the country’s economy thanks to its strong oil reserves.

This report provides in depth analysis of the Iraqi defense market, with identification of market drivers augmenting its provision of data on the current industry size and growth expectations to 2018. Together with its investigation of the industry structure and procurement dynamics, with analysis of the competitive landscape of the Iraqi defense industry, and its assessment of the business environment, Future of the Iraqi Defense Industry – Market Attractiveness, Competitive Landscape and Forecasts to 2018 should be considered the definitive guide to the Iraqi defense market, and required reading for those serious about capitalizing on the significant opportunities it holds.

KEY MILITARY MARKET DRIVERS
Iraq is undergoing a phase of post-war national development, as all aspects of the national infrastructure – including the military – need rebuilding. The toppling of the Saddam Hussein regime and subsequent period of prolonger turmoil left the country’s armed forces in a vulnerable state, rendering them incapable of defending themselves against any form of internal or external aggression.

This will be the primarily driver of the healthy growth forecast for Iraq’s defense sector, but it is vital for organizations seeking to make the most out of the opportunity this represents to have a properly nuanced understanding of the forces that will be driving the market.

The considerable loss and wear and tear of equipment during the war and its aftermath period have left the Iraqi military in need of modern arms and equipment. The complete withdrawal of US forces in 2012 amplified the need of weaponry to deal with the Kurdish insurgency, sectarian violence, and the terrorist activities of Al-Qaeda. Consequently, the Iraqi government drafted a military reform program to address the need for military hardware, with its efforts to rebuild the military following the withdrawal of US troops set to be the primary factor driving Iraq’s military expenditure over the next decade.

The Middle East is mired by cross border tensions, which necessitates high national security expenditure. For instance, Iraq is closely monitoring the ongoing Syrian civil war and the strengthening hold of Sunni terrorists as they threaten to fuel violence in the country.
Iraq shares a long history of conflicts with Syria with regards to the unification of both nations, with tensions peaking during Saddam Hussein’s era and the Persian war. Iraq alleges that Syria and Iran are instigating religious conflicts within its borders, in addition to aiding terrorists. Indeed, Iran too has a considerable history of conflict with Iraq, with both countries competing for regional supremacy; this situation has been further inflamed by Iran’s projected production of sufficient weapon-grade uranium for a nuclear explosive by mid-2014.

Furthermore, Iraq has strained relations with its other neighbors: Kuwait, Saudi Arabia, and Turkey. Internal conflicts with the autonomous Kurdistan region also fuel the sectarian violence in the country; meanwhile, traditional enmity with Israel adds to the perceived threats, propelling the Iraqi government to boost its defense expenditure.
Iraq urges Western nations to stop sending arms to Syrian rebel forces for fear of them being used against its military.

Iraq’s internal security is threatened by two factors: the surge of Al-Qaeda terrorists and increased domestic Sunni and Shia militant groups’ activities. Following the withdrawal of US troops in 2011, the wave of car bombings that had plagued the capital grew, peaking in 2013, and ultimately claiming around 5,700 civilian lives. This, among other factors, see Iraq by far the worst affected country in the world according to Strategic Defence Intelligence’s Terrorism Index.

Indeed, violent incidents have increased from an average of 300 per month in 2011 to 1,200 per month in 2013, with an increase in sectarian violence feared as a result of the rise in insurgency from Syria and Iran. Consequently, the Iraqi government has been advising western governments against the supply of arms to Syrian rebels, who are allegedly shipping these arms to Iraq to perpetuate the violence. Shia groups and the militia are retaliating against violence by Sunni militant grounds, but the Iraqi military and police lack the manpower and capabilities to tackle widespread terrorist and military incidents; counter-terrorism is the main area where Iraq is sorely missing the capabilities and efficiency of the departed US military force, and this gap is set to drive homeland security expenditure to 2018.

Iraq has the world’s fourth largest oil reserves and is an important producer and exporter of petroleum products. The country’s offshore oil exploration infrastructure is threatened by various militant groups and Al-Qaeda. Iraq employs the services of 40,000 energy police personnel for the protection of its onshore and offshore oil infrastructure, whilst its Navy began procuring UAVs in 2012 for the protection of its southern oil platforms.

Iraq is expected to continue to invest in the protection of its oil industry, which will create market opportunities for technologies catering to the identification and access control, surveillance, perimeter protection, information technology security, control, communications and intelligence (C3I) markets.

Future of the Iraqi Defense Industry

Future of the Iraqi Defense Industry