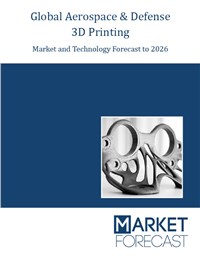 The Global Aerospace & Defense 3D Printing Market is estimated at around USD 1.56 billion and is expected to grow to USD 5.90 billion by 2026 at a CAGR of around 15.93%. The cumulative market is expected to account to around USD 30 billion during the forecast period.

The key drivers of the market include: reduction in overall manufacturing time, reduction in raw material (which translates into direct cost saving) and the ease of deployment. Airlines are investing into in-house 3D printing capabilities, these in-house centers are expected to produce cabin interior components. Examples of airlines which have invested in an in-house 3D printing facility are Air New Zealand and Emirates.

An in-depth Scenario analysis is covered in the report which includes three scenarios and their impact on each of the segments mentioned.

The in- depth coverage of this report across its sections are:

The technology forecast deals with five of the most commonly used 3D Printing technologies in the Aerospace & Defense sector.