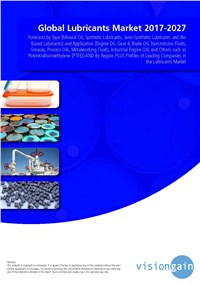 The key player has calculated that the global lubricants market will see a capital expenditure (CAPEX) of $154,951 mn in 2017. Read on to discover the potential business opportunities available.

The key player understands that the Lubricants Market will register strong growth. The Lubricants Market is a relatively large market with the majority of the largest revenue generating companies involved in the business, and all the factors analysed in this report illustrate that the industry will continue to exhibit significant growth in the next ten years, providing excellent commercial opportunities worldwide.

A lubricant is any substance that is introduced between relatively moving parts to reduce friction and wear rate. They are used in between two or more bodies which are in relative motion with each other to reduce heat and in turn, help in the life of the machine by reducing the wear and tear in them.

The Asia-Pacific region is an emerging region for the automotive industry and is expected to offer promising and attractive perspective for the coming years. The region presents double interest of having large populations to target with sales growth potential and developing ever-growing automotive manufacturing hubs to produce for Asia and the world. The increased demand for oils where lubricants usage for automobiles is of the essence, and the introduction of new models by automobile manufacturers with more varied and extensive usage of composites as steel reaches its limits, are driving demand for the Lubricants market.

Numerous factors will also increase the usage of lubricants in automotive industries such as; the increasing demands of transportation in the 21st century, approaching their end of life, and the new, upgrades, and restoration of residential, and institutional infrastructures.

Visiongain’s The Global Lubricants Market 2017-2027 report can keep you informed and up to date with the developments in the market, across five different regions: North America, Europe, Asia Pacific, Latin America and the Middle East and Africa.

With reference to this report, it details the key investments trend in the global market, subdivided by regions, capital and volume. Through extensive secondary research. visiongain has identified a series of market trends that will impact the Lubricant market over the forecast timeframe.

The report will answer questions such as:
- How is the lubricants market evolving?
- What is driving and restraining lubricants market dynamics?
- How will each lubricant submarket segment grow over the forecast period and how much Sales will these submarkets account for in 2027?
- How will market shares of each lubricants submarket develop from 2017-2027?
- Which individual technologies will prevail and how will these shifts be responded to?
- Which lubricants submarket will be the main driver of the overall market from 2017-2027?
- How will political and regulatory factors influence regional lubricants markets and submarkets?
- Will leading national lubricants markets broadly follow macroeconomic dynamics, or will individual country sectors outperform the rest of the economy?
- How will market shares of the national markets change by 2027 and which nation will lead the market in 2027?
- Who are the leading players and what are their prospects over the forecast period?
- How will the sector evolve as alliances form during the period between 2017 and 2027?

Five Reasons Why You Must Order and Read This Report Today:

4) The report provides forecasts for the Global Lubricants Market by Geography, for the period 2017-2027

This independent 184-page report guarantees you will remain better informed than your competitors. With 163 tables and figures examining the Lubricants market space, the report gives you a direct, detailed breakdown of the market. PLUS, Capital expenditure AND Volume are broken down into the Type, Application and Geography. This report that will keep your knowledge that one step ahead of your rivals.

This report is essential reading for you or anyone in the Lubricants sector. Purchasing this report today will help you to recognise those important market opportunities and understand the possibilities there. I look forward to receiving your order.