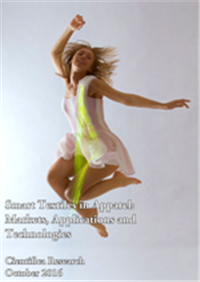 Smart Textiles and Wearables: Markets, Applications and Technologies examines the markets for smart textiles and wearable technologies, the companies producing them and the enabling technologies. This is creating a 4th industrial revolution for the textiles and fashion industry worth over $130 billion by 2025.

Advances in fields such as nanotechnology, organic electronics (also known as plastic electronics) and conducting polymers are creating a range of textile–based technologies with the ability to sense and react to the world around them.  This includes monitoring biometric data such as heart rate, the environmental factors such as temperature and The presence of toxic gases producing real time feedback in the form of electrical stimuli, haptic feedback or changes in color.

Third generation wearables represent a significant opportunity for new and established textile companies to add significant value without having to directly compete with Apple, Samsung and Intel.

The report predicts that the key growth areas will be initially sports and wellbeing followed by medical applications for patient monitoring. Technical textiles, fashion and entertainment will also be significant applications with the total market expected to rise to over $130 billion by 2025 with triple digit compound annual growth rates across many applications.

The rise of textile wearables also represents a significant opportunity for manufacturers of the advanced materials used in their manufacture. Toray, Panasonic, Covestro, DuPont and Toyobo are already suppling the necessary materials, while researchers are creating sensing and energy storage technologies, from flexible batteries to graphene supercapacitors which will power tomorrows wearables. The report details the latest advances and their applications.

This report is based on an extensive research study of the wearables and smart textile markets backed with over a decade of experience in identifying, predicting and sizing markets for nanotechnologies and smart textiles. Detailed market figures are given from 2016-2025, along with an analysis of the key opportunities, and illustrated with 99 figures and 6 tables.