Breaking the Chain That Culminates in Cancer 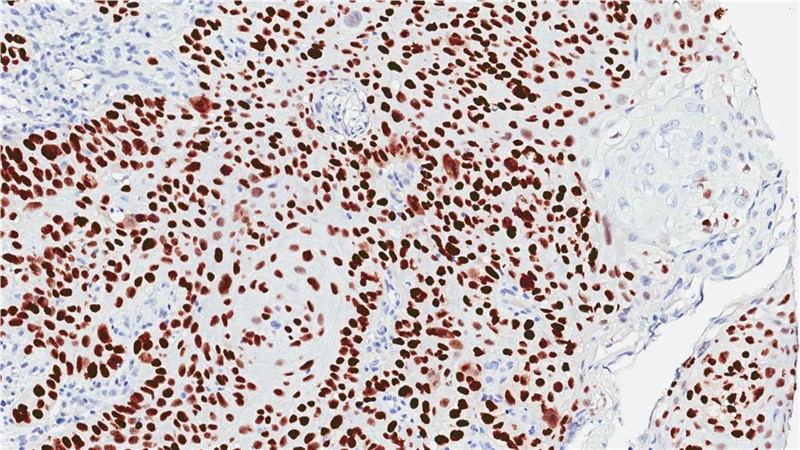 A row of dominoes, if you take out one piece, the last piece will never fall off. Similarly, many fragments must be arranged in a cell and pushed simultaneously to cause cancer. Twenty-two years ago, Alea Mills, a Cold Spring Harbor Laboratory (CSHL) professor, discovered the protein p63. Recently, she found that a specific version of p63 (?Np63α) can cause cancer when overactive. Mills and her colleagues have been trying to figure out a way to close it but to no avail. Now they have found a way to stop the domino from falling, not by turning off ?Np63α itself, but by turning off other proteins that activate it.

p63 regulates stem cells, which are immature cells that have the potential to grow into different kinds of mature cells. When one variant of the protein, ?Np63α, is overactive, stem cell production never turns off. When that happens in squamous cells, which form the covering of the skin and many other organs, stem cells grow out of control and form tumors. These cancer stem cells invade other tissues and even wrap around the nerves of the face. The tumors can be painful, disfiguring, and challenging to remove. Mills says:

“I think of the cancer stem cells as kind of like a bad seed in your garden that will grow a weed if not surgically removed or somehow controlled.”

Mills’ team identified a cascade of four proteins that act as a series of dominos to activate ?Np63α. Some of these proteins were already known to promote other kinds of cancer, so there were already drugs in clinical trials to deactivate them.

When the Mills group added these drugs to patient-derived cancer stem cells growing in a Petri dish, the cells became less aggressive, less mobile, and slower growing. Mice with these cancerous squamous cells treated with these drugs developed smaller tumors.

Matt Fisher, a postdoctoral fellow in Mills’ lab who led this study, says, “Squamous cell cancer is not easy cancer to treat right now, and there’s not a lot of therapeutic options. This is why we think identifying pathways that include druggable targets is so important.” The discovery of four new therapeutic targets for this disease offers new hope for treating this deadly cancer.