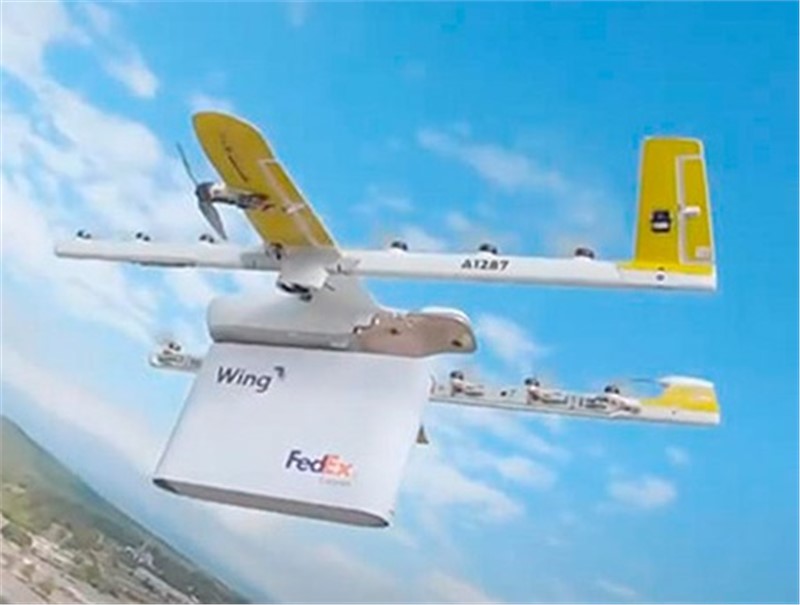 Package drones are used to make hassle-free deliveries of small products like books, medicines, food, etc. They are a cost-efficient alternative to road transport and have a lower carbon footprint in case of combustion engine cars and vans. The use of this technology supports the use of drones as a sustainable alternative to existing transportation methods. Companies like FedEx, Zipline, and Amazon already started using this technology.

Amazon announced an R&D project based on the use of package drones for home delivery back in 2013. Packages that weighed up to 5 lbs would be delivered within the timeframe of 30 minutes since the placement of the order. They have been developing and testing this platform via Prime Air Development Centres based in US, UK, Austria, France, Israel, o.a.

Amazon’s UAV makes use of an onboard navigation system that has fully autonomous obstacle recognition technology. It helps with the detection of potential hazards in the path to be followed by the UAV. The environmental landscaping obtained via this technology would be used to chart the trajectory of the drone. The UAV makes use of small helipads that distinguish the safe delivery zones from the unsafe areas.

The first successful drone delivery was made in 2016 to Cambridgeshire, England. Amazon’s ground-based mobile drone fulfillment and maintenance carriers were awarded a patent in the year 2017. While in 2019, the Prime Air Drone Design was unveiled at the MARS conference. In 2020, Amazon received FAA approval to operate its Prime Air Delivery Drones to make customer deliveries.

FedEx is another company that makes use of package drones for delivery. According to FedEx, the e-commerce market for the United States is expected to grow to a value of USD 100 Million by the year 2026. The company stated that the package deliveries are getting closer to residencies by the day. As of 2021, FedEx Express initiated the delivery of FMCG (Fast-moving consumer goods) via drones to consumers. The company partnered with Wing which is a technology company based in California. Wing operates drones in countries including the United States, Finland, and Australia. The partnership is a part of the Integrated Pilot Program launched by the US Department of Transportation. Products like toothpaste, consumables', candles, etc. have been delivered to consumers via 80,000 trial runs. The items were purchased from roughly 22 retailers. Wing has an active partnership with other franchises like Walgreens. The company also delivered medications on a door-to-door basis through this alliance.

Australia is another potential market for Package Drones. The retail sales within this region could increase by USD 400 Million by making use of this technology. The consumers could save roughly USD 60 Million in terms of delivery cost on using drones as an alternative to conventional means of transportation. Moreover, commercial drones can also reduce the carbon footprint marginally across the world. Wing states that roughly 100,000 metric tons of CO2 can be reduced by the year 2030 within Australia via Drone Technology.

The burgeoning economic output from the retail market is one of the key drivers for this vertical. Moreover, the growth in partnerships and experimentation amongst retailers to boost sales is expected to support market expansion. Factors like real-time traceability of delivery drones are also anticipated to serve as a factor that increases retail sales.

Packed Drones make use of Real-Time Tracking technologies like GPS that help both retailers and customers to track their passage. Moreover, these drones can be used to make deliveries to remote locations that cannot be reached through roadways. It is a scalable technology that can be used to make quick deliveries for perishables.

The growth in the adoption of unmanned technology across various verticals is expected to boost the market growth for package drones. However, since drones are operated remotely they are highly susceptible to cyber thefts. Therefore, technology innovators are increasingly investing in cyberspace to establish strong security features for the drone.

Currently, the usage of Drone is restricted to some regions specific. Legislative support is expected to broaden the adoption of this technology across several markets. The size of the payload is another key restraint experienced by this market. Presently, drones can be used to make small deliveries but their application across products that exceed a 2Kg weight benchmark is limited. Climate also plays an integral role in the delivery to be made by package drones. Adverse climate conditions can severely impact the delivery time as well as quality.