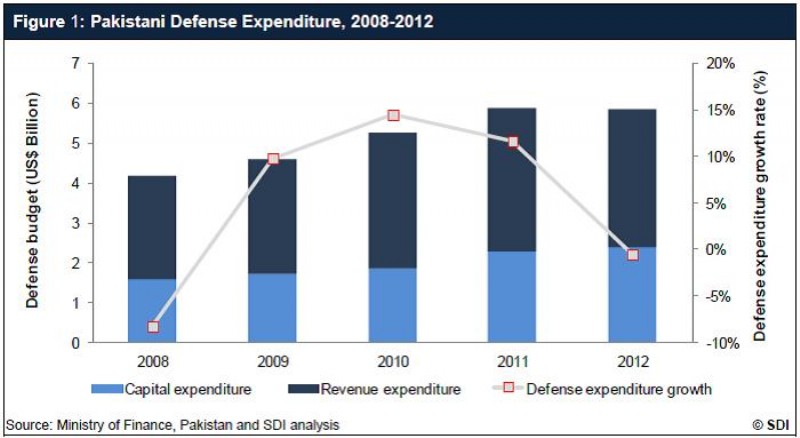 During the review period (2008-2012), the total defense expenditure of Pakistan increased at a CAGR of 8.70% to value US$5.8 billion in 2012, excluding US$1.2 billion of US military aid. As a result, the country was the world’s third-largest importer of arms during 2007–2011 as per Stockholm International Peace Research Institute (SIPRI). Furthermore, defense expenditure is expected to record a CAGR of 9.18% over the forecast period, to value US$8.9 billion by 2017.

Due to the lack of a structured defense budgeting policy until 2008, the Pakistani defense industry has experienced widespread corruption in the use of allocated funds. Although defense procurements are supposed to be made through competitive bidding, this rule is not strictly enforced, which leads to a lack of transparency in the awarding of defense deals. Furthermore, while efforts have been made to streamline the defense budget, Pakistan does not disclose the portion of US military aid assigned for expenses.

Pakistan often aligns its defense procurement strategy with that of India, with which it is in territorial dispute, so that its armed forces will be equal in the event of an armed conflict. As a result, Pakistan continues to increase its defense budget despite its relatively small economy. However, Pakistan’s dispute with India has begun to effect its relations with other supplying counties. The US is currently reviewing its arms supplies to Pakistan on the grounds that the country is amassing the systems to use in conflict with India.

The Pakistani Defense Industry - Market Opportunities and Entry Strategies, Analyses and Forecasts to 2017

Future of the Pakistani Defense Industry