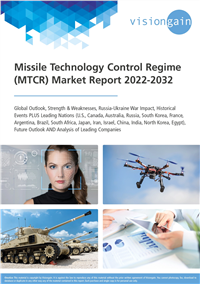 Global Missile Technology Control Regime (MTCR) Market (COVID-19 Impact Analysis):
The Missile Technology Control Regime is an unofficial and voluntary group of nations that seeks to coordinate national export licencing initiatives aimed at stopping the proliferation of unmanned delivery systems that can carry weapons of mass destruction. The original founding nations of the MTCR were the United States, Canada, France, Germany, Italy, Japan, and the United Kingdom. Since then, the MTCR has expanded to include a total of thirty-four nations, each of which has an equal position within the Regime.

The Missile Technology Control Regime (MTCR) Market Report 2022-2032: This report will prove invaluable to leading firms striving for new revenue pockets if they wish to better understand the industry and its underlying dynamics. It will be useful for companies that would like to expand into different industries or to expand their existing operations in a new region.

The MTCR Has Repeatedly Shown Itself to Be a Useful Tool in the Fight Against Missile Proliferation
By triggering missile programme cancellation, conversion, timetable delays, as well as an increase in development costs and part scarcity, it has been attributed with preventing the proliferation of missiles. The cancellation of two Brazilian systems (Avibras’s SS series and Orbita’s MB series) as well as delays in India’s missile development are examples of specific victories. Formerly a target of the MTCR, Israel is now a supporter. The government is also credited with postponing China’s deliveries of M-9 and M11 missiles to Pakistan and with pressuring Germany to strengthen its laws enforcing export controls. Even though it ultimately can’t stop a nation from creating a missile programme, it can restrict the spread of technology.

The Problem with MTCR Membership
The majority of the top manufacturers of missile technology are now members of the MTCR, which was established in 1987 by the largest industrial governments of the Group of Seven (G7). Even a few nations that had earlier been adamantly opposed to the MTCR, including Brazil and India, later joined and are now heavily involved in its operations. However, a number of significant missile manufacturers and exporters, like Israel, do not take part in the MTCR. It is particularly important and challenging that China, which has allegedly provided significant assistance to others, including Iran and North Korea, and has transferred missile technology to a variety of recipients over the years, including Qatar, Saudi Arabia, and Turkey (see the SIPRI Arms Transfers Database), remains outside of the regime.

What Questions Should You Ask before Buying a Market Research Report?

You need to discover how this will impact the missile technology control regime (MTCR) market today, and over the next 10 years:

This report tells you TODAY how the missile technology control regime (MTCR) market will develop in the future. This market is more critical now than at any point over the last 10 years.

Countries mentioned below have been considered under this report

The report also includes profiles and for some of the leading companies in the Missile Technology Control Regime (MTCR) Market, 2022 to 2032, with a focus on this segment of these companies’ operations.

Our work identifies which organizations hold the greatest potential. Discover their capabilities, progress, and commercial prospects, helping you stay ahead.

How will the Missile Technology Control Regime (MTCR) Market, 2022 report help you?
In summary, our 270+ page report provides you with the following knowledge: