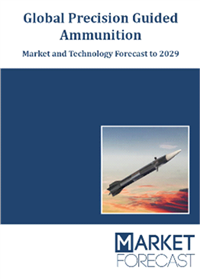 Precision Guided Ammunitions are expected to be high in demand as they reduce the extent of destruction of collateral damage and it is therefore possible to protect non-combatants during war. The development of PGMs has to some extent mitigated the difficult moral decisions which militaries had to make during the second world war with respect to carpet bombing. During the gulf war, the casualties suffered by civilians and soldiers due to precision guided munitions was much lower compared to the previous wars in which the United States was involved.

The total Global market for Precision Guided Ammunitions is estimated at around USD 31-32 Billion in 2020 and the market is expected to grow to around USD 67-68 Billion by 2029. The CAGR of the market is accounted at around 9%. Tactical Missiles are expected to account for around half of the market.  Revenues obtained from other supporting equipment and platform are not included in the scope of this report.


The study is aimed at:
Segmentation covered in this report
The market is segmented based on Region, Technology, and Product:

Who is this report for?
Tell a Friend | Print page | Download PDF Brochure