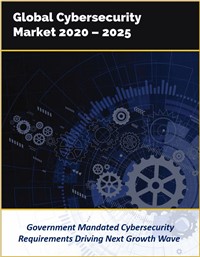 Enterprise and government spending for cybersecurity products, managed services, and professional services will be substantial over the course of the next few years.  Cumulative global spending on cybersecurity products and services will exceed one trillion US dollars over the next five years with multiple trillions of dollars in cybercrime damages realized through 2025.  Accordingly, The report sees damage control and mitigation solutions as a critical portion of the cybersecurity market.

At the macro level, spending is driven by the realization of increasingly more voluminous and sophisticated global threats to digital infrastructure. At the business level, company reliance upon the Internet, open interfaces and communication between customers and other companies necessitates robust cybersecurity solutions. In addition, new technologies and solutions such as the Internet of Things (IoT) will require new approaches to cybersecurity and hence innovative solutions as evaluated in the report Artificial Intelligence in IoT Security and Fraud Prevention.

With recent high-profiles events such as alleged espionage on the part of Huawei, cybersecurity is also getting extreme attention at the government level. By way of example, The Internet of Things (IoT) Cybersecurity Improvement Act of 2019 is being introduced in the Senate by U.S. Among other areas, the Act is intended to address IoT device security relative to Secure Development, Identity management, Patching, and Configuration Management. Quoting opinions from market leaders (such as Cloudflare, Symantec, VMware, and others), the bill asserts a desperate need for cybersecurity market regulation.

The bill recognizes that there could be minimally be some fundamental security improvements in areas such as default device passwords with supporting material citing, “Sometimes shipped with factory-set, hard-coded passwords and oftentimes unable to be updated or patched, IoT devices can represent a weak point in a network’s security, leaving the rest of the network vulnerable to attack.”

At the network services provider level, the cybersecurity market is heating up as carriers realize that the advent of 5G and other network advances will increase network complexity, which will translate into increasingly more potential vulnerability areas. Accordingly, communication service providers are both working unilaterally as well as banding together to address common cybersecurity concern areas. By way of example, AT&T recently became the first North American carrier to join the Global Telco Security Alliance, which launched last year with founding members Etisalat, Singtel, SoftBank and Telefónica.

The Report sees evolving IoT systems and emerging 5G networks as new opportunities for the cybersecurity market. Leading companies such as Palo Alto Networks, Cyberlance (BlackBerry), and others are poised to capitalize on the market for securing IoT and 5G based networks, systems, applications, and services. We see the use of AI as a key tool for dealing with increasingly interconnected networks, device, and open access to data. This is because AI solutions focus on behavior rather than relying upon identifying malware signatures.

While some of the same types of security solutions will be required for 5G as other ICT infrastructure elements, such as network firewall protection, there will also be many new areas of concern. Release 16 addresses many 5G security market issues including networking slicing access, small data mode, session management, mission-critical architecture, and edge devices. The standard may also address security in support of voice continuity, 5G LAN, and a few notable other areas including enhanced URLLC and virtualization security and restrictions on local operators.