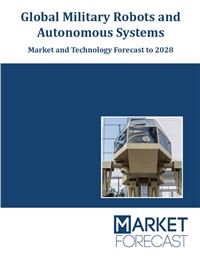 Market forecasts by Region, by Technology, Application, Operations, Platforms, and by End-User. Technology and Market Overview, and Leading Companies Profiles

Military robots are autonomous robots or remote-controlled mobile robots created for military functions, from transport to search & rescue and strike mission. Some of these robotic systems are presently in use, and several such robots are under development. These military robots and autonomous systems just rolling out or already in prototype stage are far more proficient, logical, and autonomous than ones now in Iraq and Afghanistan. As new add-ons are developed, military robots will be able to take on a wider set of battlefield roles. As of now the United States military remains the largest user of these robots, however countries like China and Russia are investing billions in robotics research and development that will allow them to narrow the gap with the US.

Market Forecast’s latest report “Global Military Robots and Autonomous Systems - Market and Technology Forecast to 2028” examines, analyzes, and predicts the evolution of airborne military robot systems, technologies, markets, and outlays (expenditures) over the next 8 years – 2020 -2028 in the military robots and autonomous system industry.  It also examines military robot markets geographically, focusing on the top 95% of global markets, in the United States, Europe, and Asia.

In this report we have classified military robots and autonomous system industry under 5 major groups. We will research these 5 major groups and also provide forecast figures from 2020 – 2028. These are: