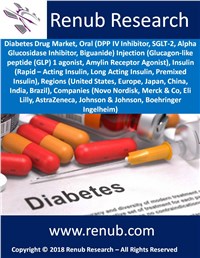 Diabetes is condition in which the patient has a high blood sugar level over a long drawn period. There are 3 types of diabetes Type 1 diabetes, Type 2 diabetes and Gestational diabetes. Type 1 diabetes is a condition in which patient pancreas fail to produce enough insulin. It is also called juvenile diabetes. In Type 2 diabetes body cells fails to respond to insulin properly. Third one is Gestational diabetes in which a pregnant woman with no history of diabetes develops high blood sugar level. Globally 90% of the diabetes patients are Type 2 and rest are Type 1 cases.

Novo Nordisk is the Largest Player in Global Diabetes Drug Market
In this report, published by Renub Research a comprehensive assessment of global diabetes drug revenue by five major key players is covered. The key players covered in the report are Novo Nordisk, Merck & Co, Eli Lilly, AstraZeneca, Johnson & Johnson and Boehringer Ingelheim. This report covers historical sales analysis and forecast along with major factors like diabetes R&D and pipeline of diabetes drug in separate chapter.