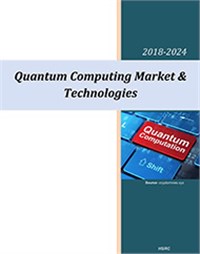 We are in the midst of a “Quantum Computing Technologies Supremacy Race”, one that will result in groundbreaking computing power, enabling disruptive new quantum computing technologies that have the potential to change long-held dynamics in commerce, intelligence, military affairs and strategic balance of power. If you have been paying attention to the news on quantum computing and the evolution of industrial and national efforts towards realizing a scalable, fault-tolerant quantum computer, that can tackle problems, unmanageable to current supercomputing capabilities, then you know that something big is stirring throughout the quantum world.

In a way that was unheard of five years ago, quantum physicists are now partnering with corporate tech giants, to develop quantum computing capabilities and technologies as the foundation of a second information age.

Advances in quantum computer design, fault-tolerant algorithms and new fabrication technologies are now transforming this “holy-grail” technology into a realistic program poised to surpass traditional computation in some applications. With these new developments, the question companies are asking is not whether there will be a quantum computer, but who will build it and benefit from it. Realizing quantum computing capability demands that hardware efforts would be augmented by the development of quantum software to obtain optimized quantum algorithms able to solve application problems of interest.

China Quantum Computing: On May 3, 2017, Xinhua, the official press agency of the People’s Republic of China, surprised the Quantum Computing community by announcing that “Chinese scientists have built the world’s first quantum computing machine that goes far beyond the early classical — or conventional — computers, paving the way to the ultimate realization of quantum computing. Scientists announced their achievement at a press conference in the Shanghai Institute for Advanced Studies of University of Science and Technology of China. Chinese quantum computing scientists believe that China quantum computers could, in some ways, dwarf the processing power of today’s supercomputers”.

IT multinationals, such as IBM, Intel, Microsoft and others (see image below), run their own quantum computing projects. IT giants Google and Microsoft have set challenging quantum computing goals for 2017. Their ambition reflects a broader transition taking place at start-ups and academic research labs alike: to move from pure science towards engineering.

In March 2017, IBM Quantum Computing R&D team took an historical step towards mass adoption of quantum computing by launching a commercialized quantum computing system aimed at businesses and the science industry. Dubbed as IBM Q, the system and services are accessible via the IBM Cloud platform. Currently, you can tool around with building algorithms for quantum computing using the IBM Quantum Experience. Since its launch, about 40,000 users have run over 275,000 experiments on this tool.

IBM Quantum Computing R&D team announced the release of an API (Application Program Interface) that lets developers and programmers, even those lacking a deep background in quantum physics, build interfaces that operate between IBM quantum computers running at speeds of five quantum bits (qubits) and the more conventional computers in use today.

Due to economic interest and the “decline of Moore’s Law” of computational scaling, eighteen of the world’s biggest corporations (see image above) and dozens of government agencies are working on quantum processor technologies and/or quantum software or partnering with the quantum industry startups like D-Wave. The main contenders in this race are IBM, Intel, Microsoft and Google. Near-term expectations for quantum computing range from solving optimization problems, quantum-encrypted communications, artificial intelligence, smart manufacturing & logistics and smart retail, to quantum computing services in the cloud and molecular structure research.

Smaller quantum computers will make other contributions to industry (energy, logistics etc.), defense and national security intelligence markets, as well as other markets spanning from drug design to finance.

Even simple quantum computers can tackle classes of problems that choke conventional machines, such as optimizing trading strategies or pulling promising drug candidates from scientific literature.

The fierce competition at the national industrial and academic level is leading to a race for quantum supremacy. The competitors are all worthy of respect, especially because they are striving for supremacy not just over each other, but over a problem so big and so complex, that anybody’s success is everybody’s success.

According to the “Quantum Computing Technologies & Global Market – 2018-2024” report, the global Quantum Computing market* will reach $10.7 billion by 2024, out of which $8.45 billion stem from product sales and services and $2.25 billion from government-funded RDT&E programs.

The 2-volume 529-page landmark report is the only comprehensive review of the global quantum computing market available today. This report is a valuable resource for executives with interests in the market. It has been explicitly customized for ICT industry managers, investors and government decision-makers to enable them to identify business opportunities, emerging applications, market trends and risks, as well as to benchmark business plans.

Questions answered in this report include:

Why Buy This Report?

A. Market size data is analyzed via 5 independent key perspectives.
With a highly fragmented market we address the “money trail” – each dollar spent is analyzed and crosschecked via 5 orthogonal viewpoints:

E. The report includes over 300 links to the Quantum Computing community information sources

Q1] Why is the quantum cryptography market size not included in this report?

A1] The quantum cryptography market size will be published in a future market report.

Q5] What are the quantum computer applications?

A7] 1qbit is a privately held company.

Q8] Which are the top quantum computing companies?

Q10] What are the Quantum Computing Applications?

A10] The report includes a detailed background of 55 by Quantum Computing Applications and Vertical Markets.