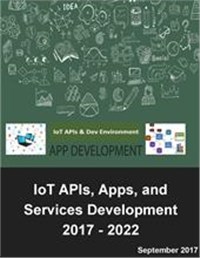 Software development companies and network integrators are increasingly focusing attention on the Internet of Things (IoT), both for applications directly involving IoT as well as integrating existing software with sensor networks, remote devices, and cloud-based computing.  Application Programming Interfaces (API) are a key enabler of IoT software development as well as application and service operations.  APIs are rapidly becoming table stakes for interoperability between IoT platforms, devices, and gateways.

Key areas for IoT app and service support include IoT specific OS, Application Development & Deployment Platform (ADDP), and IoT Testing services.  For example, ADDP and IoT Testing services in particular will be crucial to mitigate risks for enterprise deployment and reduce lifecycle costs.  Another important area is IoT simulation as it will be critical to identifying network impact, potential security concerns, and much more.  Among the key technologies, Digital Twinning will play an especially important role.

This research assesses the market challenges and opportunities associated with development and support of IoT APIs.  The report evaluates leading companies, solutions, technologies, and use cases.  The report also analyzes the role of IoT APIs in support of key functional components of the IoT Ecosystem including Identity Management, Mediation, and other operational support functions.  The report includes detailed forecasts for IoT API revenue globally, regionally, and by industry verticals for the period 2017 to 2022.