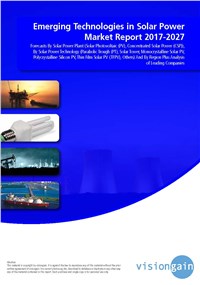 Increasing awareness by society and governments for the use of renewable sources of energy, will be the driving force for the solar power market over the next few years. Increasing environmental concerns such as, increase in the greenhouse gas emission, increasing government investment and private sponsorships are paving the way for the development of solar power plants for the generation of electricity, for residential and commercial applications

The key player assesses that emerging technologies in solar power will generate $163.9bn in revenues during 2017.

This report keeps you informed and ahead of your competitors. Gain that competitive advantage.

This report answers questions such as:

5 Reasons why you must order and read this report today:

3) The study reveals where and how companies are investing in solar power We show you the prospects for the following regions:

Rest of the World

How will you benefit from this report?

Competitive advantage
This independent 207 page report guarantees you are better informed than your competitors. With 146 tables and figures examining the solar power market space, the report gives you an immediate, one-stop breakdown of your market as well as analysis, from 2017-2027 keeping your knowledge that one step ahead of your rivals.

Who should read this report?