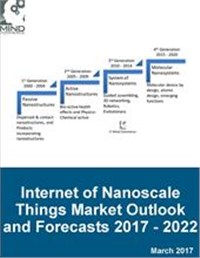 Nanoscience is a field of study concerned with manipulation of matter on an atomic, molecular, and supra-molecular scale. Nanotechnology refers to the application of nanoscience to build nano-components based on the manipulation of matter with at least one dimension sized from 1 to 100 nanometers. Nanotechnology has been slowly progressing for decades and is anticipated to make a big impact in certain key industry verticals including aerospace, clothing, construction, energy management, healthcare, electronics, manufacturing, packaging, and more.

Leveraging computing and telecommunications technologies represents a substantial opportunity for nano-devices and nano-sensors to communicate as part of a nano-network. Autonomous nano-communications, supported by Internet of Things (IoT) technologies, will create the opportunity for signaling, monitoring, and control of nano-systems for the benefit of many industry verticals. Internet of Nanoscale Things (IoNT) networks represents nanotechnology embedded with physical things, leveraging IoT to form an interconnected system.

This research examines nanotechnology trends and assesses the future IoNT including integration of IoT systems with nano-sensors, nano-actuators, nano-devices, nano-machines, and other nano-components as part of a nano-system architecture for commercial solutions, services, and applications. The report evaluates current and anticipated nanotechnology use cases within the IoT ecosystem and assesses the market potential globally, regionally, and segmented by communication network, nano-device, nano-component, and industry vertical for the period 2017 to 2022.