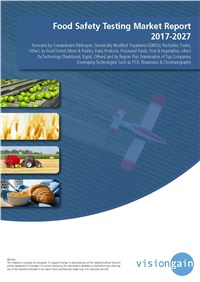 Forecasts by Contaminant (Genetically Modified Organisms), by Food Tested (Processed Foods, Fruit & Vegetables, other) by Technology and by Region Plus Examination of Top Companies Developing Technologies Such as PCR, Biosensors & Chromatography

This comprehensive new food industry report reveals that the food safety testing market will achieve revenues of $13.1bn in 2017.

Are you involved in the food supply chain of more specifically the food safety testing market? If so, then you must read this report
It’s vital that you keep your knowledge up to date. You need this report.

Market scope: The Food Safety Testing reports provides insight into the large and ever growing food testing market and also examines the different testing technologies adopted worldwide. With outbreaks and contaminations such as salmonella, E. coli, listeria, and many more, the food testing market has grown at a rapid pace. Testing concerns as well as the rapidly growing international trade in food has stimulated the demand for more food safety testing all over the world and has led to technological innovation in areas such as rapid testing and new test technologies such as PCR, Biosensors and Chromatography, etc.

• Where are the food safety testing market opportunities?
- 100 tables, charts, and graphs reveal market data allowing you to target your strategy more effectively

• Which food safety testing submarket by technology will thrive from 2017-2027?
- Traditional
- Rapid
- Others

Virtual Seminar on Phase I GMPs