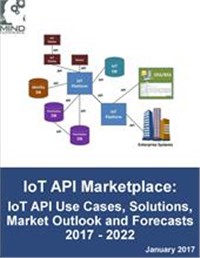 Application Programming Interfaces (API) are increasingly relied upon across a wide area of communications, applications, commerce, and digital content. The prudent use of APIs provides operational flexibility, scalability, and enhanced opportunities for new application and service deployment. In the Internet of Things (IoT), APIs will support IoT Operations in many regards including interoperability between IoT Platforms, Devices, and Gateways. Moreover, IoT APIs will become a critical part of major IoT application and service developer programs.

Mind Commerce sees an especially important role for IoT APIs in the support of signaling, communications, and information exchange between certain key authoritative data repositories including an IoT Identity Database (IDDB), Permissions Database, and Device Discovery Database. Each of these databases will be accessed via IoT APIs in support of the IoT Mediation function necessary for the long-term scalability of IoT networks and systems. Furthermore, IoT APIs will be at the foundation of data interchange in the emerging IoT Data as a Service (IoTDaaS) marketplace.

This research assesses the market challenges and opportunities associated with development and support of IoT APIs. The report evaluates leading companies, solutions, technologies, and use cases. The report also analyzes the role of IoT APIs in support of key functional components of the IoT Ecosystem including Identity Management, Mediation, and other operational support functions. The report includes detailed forecasts for IoT API revenue globally, regionally, and by industry verticals for the period 2017 to 2022.