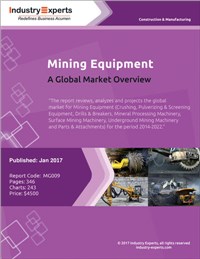 Globally, the market for mining machinery and equipment is being propelled by the prospect of an increase in the production of metals, such as iron ore and copper, which is being steered by new expansions and projects. While the initial years of this decade witnessed a decline in sales of mining equipment, the global market for the same has been maintaining sustained growth that is being stimulated by an insatiable demand for mineable commodities, production of primary metals and mining materials emanating from the developing regions of Asia-Pacific, South America and Middle East & Africa.

The global markets for the mining equipment product categories and application areas are analyzed in terms of value in USD for 2012-2022 analysis period. Worldwide market for Mining Equipment is estimated at US$100 billion in 2016 and forecast to be US$107.3 billion in 2017 and is likely to grow at a CAGR of 7.9% between 2017 and 2022, and is projected to cross US$150 billion mark by 2022. Surface Mining Machinery is estimated to account for the largest share with US$42 billion in 2017, of the global mining equipment market, while Parts & Attachments and Underground Mining Machinery to follow.

This 346 page global mining equipment market report includes 243 charts (includes a data table and graphical representation for each chart), supported with meaningful and easy to understand graphical presentation, of market numbers. This report profiles 20 key global players and 76 major players across North America – 18; Europe – 29; China – 16; Asia-Pacific – 10; and Middle East & Africa – 3. The study also provides the listing of the companies engaged in manufacturing and supply of Mining Equipment. The global list of companies covers the address, contact numbers and the website addresses of 186 companies.