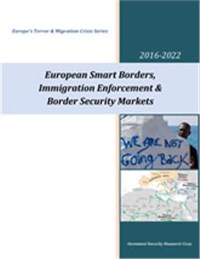 With 1.8 million asylum seekers (UN reports) crossing Western Europe’s external borders in 2015, the European border security agencies are facing challenges with a far greater reach than ever before. More than 1000 ISIS-trained jihadists returning to Europe every year, coupled with the surge of migrants to Europe are alarming concerns; as present capabilities of the European border, coast guard, intelligence services and immigration agencies simply cannot meet these challenges.

The EU-Turkey deal (if implemented) might lead to a significant decrease in the flow of refugees (by March-April 2016 the rate of migrants entering Greece declined by 90%). However, the agreement faces formidable practical, political and legal challenges (e.g., each and every one of the 22 EU parliaments has to endorse the treaty).

In the aftermath of the migration crisis and the Paris and Brussels terror attacks, a major overhaul of the Western European border security and immigration infrastructure, strategy, border security technology development and funding is already underway.

The "European Smart Borders, Immigration Enforcement & Border Security Markets – 2016-2022" report is the most comprehensive review of the border security market available today. It provides a detailed and reasoned roadmap of this growing security market.