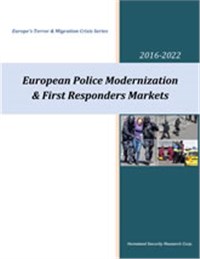 Europe’s 2.55 million police officers and 820,000 1st responders are facing ISIS terror attacks and threats coupled with the surge in entry of 1.8 million migrants (UN data) with far greater complexity than ever before.

Germany’s police forces and other 1st responders (which include only 9% of the European police officers and 1st responders) are forecast by 2020 to procure 22% of the continent’s market for police and 1st responder’s related goods and services. The European police forces challenges were best stated in March 2016 by Mr. E. Walter, Chairman of the German Federal Police (DPoIG): "Germany’s police (is) the first and last line of defense and response to any terror attack; they’re simply not equipped for the challenge. Where we are not prepared is with the policeman on the street; normally the first to confront terrorists. (For example) we need modern weapons. We need armed helmets against shooting by a Kalashnikov. We have very old weapons in the German police force. The machine guns are the machine pistol MP5 it is about 50 years old".

The "European Police Modernization & First Responders Markets – 2017-2022" report is the most comprehensive review of the market available today. It provides a detailed and reasoned roadmap of this growing market.

The market is set to undergo a major transformation from 2016-2022 through the following drivers:

This report is a resource for executives with interests in the market. It has been explicitly customized for the security industry and other decision-makers in order to identify business opportunities, developing technologies, market trends and risks, as well as to benchmark business plans.

Questions answered in this 185-page report + one* report include: