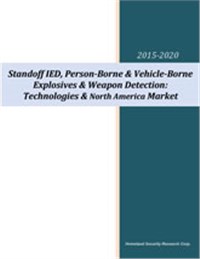 The lethality combined with the simple construction of IED, Person-Borne (PBIED) and Vehicle-Borne Explosives (VBIED) has made them the single most difficult foe in the modern battlefield. As their employment increases, the risk to innocent civilian populations also increases. The U.S. human and financial toll of IED, PBIED & VBIEDs has become a staggering reality worldwide.

In recent encounters in Iraq and Afghanistan, wherever the U.S. (and their allies) had overwhelming combat power, their adversaries (the Taliban and Iraqi insurgents) resorted to a simple combat tactic: the use of suicide bombers, vehicle-borne explosives and roadside IEDs. Lessons learned from these two wars drove and continue to drive the Pentagon to reverse this asymmetric warfare, to develop, procure and proliferate new techno-tactical ways and means using standoff explosives detection technologies throughout the U.S. military.

The purpose of standoff PBIED, VBIED and weapon detection technologies is to determine at a safe distance if a human subject or a vehicle is carrying explosives or weapons. Concealed explosives detection is perceived as one of the greatest challenges facing the counter-terror and military communities. The threat posed by suicide bombers is the key to the emergence of transformational counter-terror technologies and tactics. The maturity and deployment of advanced standoff detection technologies, capable of detecting suicide and other terrorists at a safe distance, will change the landscape of homeland security and asymmetric warfare.

The report examines each dollar spent in the market via 2 orthogonal money trails:

This Standoff IED, Person-Borne & Vehicle-Borne Explosives & Weapon Detection: Technologies & North America Market – 2015-2020 report is a resource for executives with interests in the industry. It has been explicitly customized for decision-makers to enable them to identify business opportunities, developing technologies, market trends and risks, as well as to benchmark business plans.

Questions answered in this 215-page report include:

The Standoff IED, Person-Borne & Vehicle-Borne Explosives & Weapon Detection: Technologies & North America Market – 2015-2020 report presents in 215 pages, 20 tables and 97 figures, analysis of current and pipeline technologies and 18 leading vendors. This report, granulated into 10 submarkets, provides for each submarket 2013-2014 data and analyses, and projects the 2015-2020 market and technologies from several perspectives, including:

Photochemicals, Explosives and Other Chemicals in Turkey: ISIC 2429